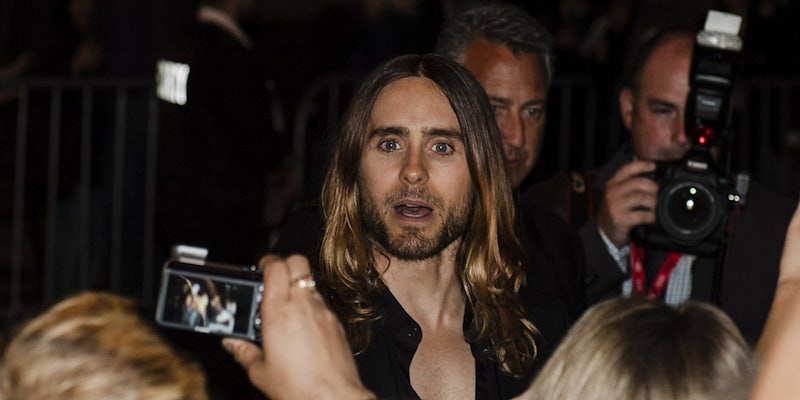 What we can learn from the Jared Leto transgender backlash

Here's why the trans community is so upset about Jared Leto's Oscar—and what we can learn.

Jared Leto won an Oscar this Sunday for his portrayal of a transgender woman in Dallas Buyers Club. Justifiably, transgender women are pissed off. Some say that his portrayal of Rayon was hollow, strange, and uninformed; others, like Bilerico’s Brynn Tannehill, claim that the film reinforces a cultural focus on the tragedy of many transgender lives at the expense of a respectful representation of transgender experience in its entirety.

In Dallas Buyers Club, Leto’s character Rayon is an HIV-positive transgender woman who must take whatever work she can in order to survive. It is true, yes, that many transgender women are at high risk for HIV infection and that they often rely on sex work for income. But that doesn’t mean transgender people want to see themselves martyred in every mainstream movie that includes a transgender character.

Last night, the Academy didn’t honor Leto’s acting; they honored the simple fact that a cisgender man would dare to portray a woman. It’s Tootsie all over again. In the pop culture imaginary, the gap between Leto’s own gender identity and Rayon’s gender identity is the film’s real source of drama. In a year that included Chiwetel Ejiofor’s incredibly moving turn in 12 Years a Slave, Leto got an Oscar for hair, makeup, and some pained expressions.

Now that Hollywood actors know that the backs of transgender women are some of the best stepping stones to an Oscar, my attention is turning to the future, when more cisgender folks get approached to play transgender roles. Leto got an Oscar out of his role, but he also earned himself the ire of the trans community for playing what Time’s Steve Friess called a “transgender Mammy.”

Based on the current response from the transgender community and its allies, Leto will go down in history as an elite Hollywood actor who appropriated the experiences of transgender people for his own fame.

If you’re an actor in film, television, or theater, you have some important choices to make if you are ever approached to play a transgender person. Here are three things you can learn from the backlash against Leto’s role:

1. Don’t play transgender roles if you are cisgender. Recommend a trans actor instead.

I know this is not what you want to hear.

A transgender role can be such an enticing challenge, a proving ground for method actors. But if you want to avoid backlash, your best bet is to refuse roles that are completely foreign to your own embodied experience of the world. There’s a difference between, say, Leonardo DiCaprio portraying Howard Hughes and Jared Leto portraying Rayon. DiCaprio doesn’t know what it’s like to be an aviator, but he knows what it’s like to have been socialized as a white man. Jared Leto, on the other hand, has never experienced gender dysphoria, never been misgendered in public, never been harassed for just daring to exist.

A gender transition completely transforms a person’s relationship to their own body and to the world. Hormone replacement therapy changes the shape of the human body, yes, but it also alters a person’s brain chemistry in powerful, mood-changing ways. Living life as a transgender person exposes you to forms of violence that most people have never even thought about: being placed in a prison with people of the opposite gender, for example. I would argue, in fact, that a transition is such a powerfully irreducible experience that it requires a transgender actor.

A straight actor may not produce a perfect portrayal of a gay character, for example, but a straight actor can at least extrapolate something meaningful from shared experiences of love, sex, and intimacy. When combined with a fair amount of education, actors can produce subtle, nuanced performances that approximate experiences radically different from their own. But no amount of research or respect can compensate for the lived knowledge of a woman like Laverne Cox, who can bring the weight of her own life to her role on Orange Is the New Black.

If you’re ever approached to play a transgender character, you can recommend some amazing trans actors to the casting agent. They can play the role informed by a lifetime of experience. I know it’s hard for Hollywood folks to resist a spotlight this sensational, but deferring to a transgender actor will result in a better film and a better relationship with the LGBT community. But if the glimmer of the Oscar is just too tempting, please keep my other two pieces of advice in mind. They will be essential for you if you decide to move forward.

2. Shut down jokes that reinforce the gender binary.

When a cisgender man plays a transgender woman, the media obsesses over the bodily details of crossing the gender binary. It happened with Tootsie, it happened with Dallas Buyers Club and it will happen again. “Did he wax?” “Did he pluck?” “How long did he have to spend in hair and makeup?” Actual transgender people hate being asked these questions, not just because they are invasive but also because they reinforce a focus on transgender bodies rather than transgender lives.

Transgender people are not just flesh, not just before-and-after slideshows, not just breathtaking spectacles of gender transformation. They are people. If you care about your role, maintain a commitment to the humanity of the population you’re portraying in all of your comments about the film.

Physical changes are just one part of the experience of a gender transition but, because we live in a scopophilic culture, they receive an inordinate amount of focus. One of the first questions most transgender people receive from strangers, for example, is about “the surgery” when, in fact, the majority of transgender people have not undergone surgery.

A gender transition is an emotional, psychological, and often a spiritual shift in someone’s personhood. Shifts in names, pronouns, relationships, and self-conceptualization matter so much more than the granular details of genitals and body hair. One of the classic mistakes that actors make in their portrayal of transgender characters is allowing the media to reinforce the titillation that surrounds gendered bodily practices that cross cultural expectations.

While Leto laughs it up about all the professional body treatments he received as a brave Hollywood hero, transgender people are stuck in the trenches, struggling with disposable razors, duct tape, and makeup just to stay alive. If you find yourself in Leto’s position, don’t do this. Shift the focus to the role, the person, the human being and don’t give into the sensationalist display of transgender bodies.

3. Actually, you know, mention transgender people when talking about the film.

In his acceptance speeches, Leto has been notoriously silent about the situation of transgender people in the United States. His Golden Globes speech was an insufficient and, frankly, irreverent response to the gravity of his role. In his Oscars acceptance speech, he mentioned victims of HIV/AIDS, yes, but he specifically mentioned transgender people a grand total of zero times. Imagine the political work Leto’s speech could have performed had he delivered a stirring tribute to transgender people and rallied against the sorts of injustices that made his character’s life unlivable.

If you take on a transgender role for the publicity, the personal glory, the honor, you should at least make an earnest effort to elevate mainstream awareness of transgender issues. More than half of anti-LGBT homicide victims are transgender women. Transgender people face rampant verbal and sexual abuse. Changing sex and gender markers on personal identification is such a complicated endeavor that it takes teams of legal experts (like those at the Sylvia Rivera Law Project) to help transgender people navigate the legal system. You can still be fired just for being transgender in 34 states. Things are not getting better for transgender folks fast enough. If you’re going to jumpstart your career with a transgender role, you need to be a part of the change we so desperately need.

Shine your spotlight on the folks who need it most, on the people whose lives make your fame possible. Use your platform for good, not to selfishly hoard the attention for yourself. And, when someone asks you about shaving your legs, you can say that you’d rather talk about your sympathy for victims of transphobic violence and your admiration for transgender people who are still managing to survive in a hostile world.