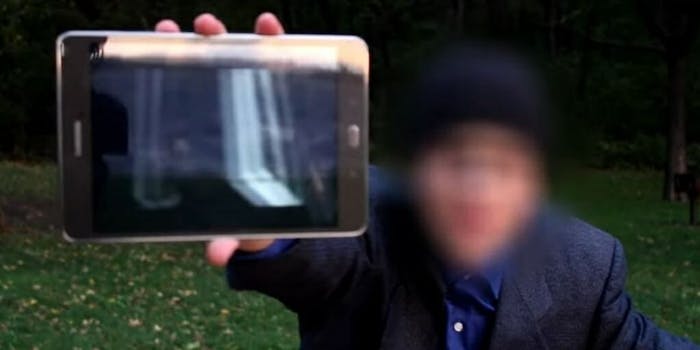 'You do not understand the danger I’m in.'

We’ve seen supposed time travelers show photographs of the future, and we’ve watched another take a lie-detector test to prove they were telling the truth about the utopia in the year 8973.

Now a person who said he’s from the year 2045 claims in an interview with the ApexTV YouTube channel that he has video footage of what the world looks like in 27 years. And he absolutely needs to show it to you.

As is usually the case with ApexTV interviews, the supposed time traveler’s face pixelated. But unlike his calmer time traveling counterparts, this man is freaking out.

“I do not have long before I need to leave,” he says. “They’re tracking me, and they know where I am right now … I need to show you something that I have.”

The man said he knows his tale will be hard to believe, but his message is urgent. “I can assure you that I’m telling you the truth and nothing but the truth because you deserve to know what’s going on behind closed doors,” he continues. “Time travel exists, and it is being withheld from the public.”

With the wind roaring in the background and the leaves rustling around him, the man says he’s a scientist from 2045 who worked on machines that made time travel possible and were released to the public in 2028. This was supposedly made possible by reverse engineering alien technology to send travelers back into the past.

The breathless man claims that in 2045, humans and robots are melding together as one, and artificial intelligence governs the entire world. There are no countries, and there is no privacy.

The man has so much anxiety about being caught, he blurts out, “These may be my final few moments. You do not understand the danger I’m in.”

You probably owe it to yourself—and to him, dammit—to watch what he has to show you.