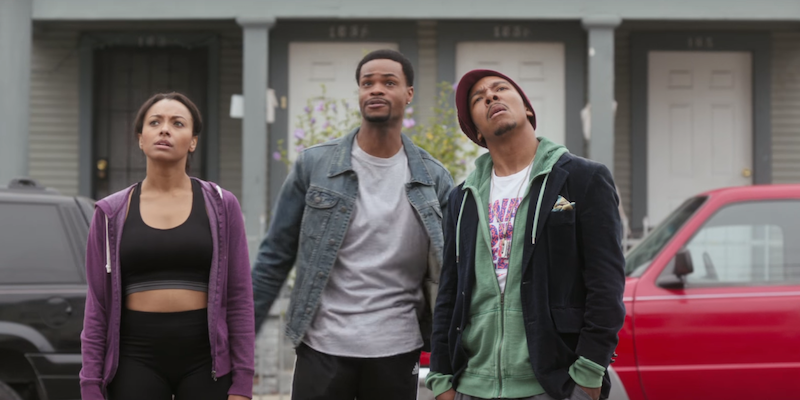 It's the clunky, star-studded romp you’ll passively stream on Netflix.

Where’s the Money, available on Netflix, is the kind of movie you used to stumble across on the shelves of Blockbuster. The cover has people you recognize, like Terry Crews, Retta, Method Man, and Mike Epps. Where did this come from? Ninety minutes later and everything makes sense again: Where’s the Money is a goofball comedy that works too hard for the laughs to come easy, but there are a few redeeming qualities.

Del (Vine star Andrew “King Bach” Bachelor) is a carefree guy going nowhere, working at his family’s gym. Del’s dad, Dre (Epps), left a cool million dollars from a robbery in the walls of a run-down house in Crenshaw. Easy peasy, Del just needs to pop in and all of his problems will be solved. Except the flophouse has succumbed to gentrification and is now a frat house. Obviously, Del has to pose as a student and rush the frat, where YouTube star and controversy machine Logan Paul is perfectly cast as an affable Greek bro, and take the most circuitous route to the basement. Except Del is Black and the frat is whiter than SoCal’s finest blow.

You can probably guess how most of the jokes will go. The hit rate is low enough to make your eyes roll, but the movie scores a few solid laughs.

Most of the movie’s success comes from the energy and sheer force of will of the cast. Bachelor is charming and somewhat recalls early Chirs Tucker. Del’s friends, Alicia (Kat Graham) and Juice (Allen Maldonado) are stereotypes. Alicia is a total fantasy and Juice is goofball, but Graham and Maldonado overcome limp material to make a good impression. The frat guys struggle more with what they’re given. Their jokes waffle between uninspired faux-woke racial commentary and easy Greek jabs. It’s all low-stakes silliness.

Credit where it’s due, I was kind of impressed by the elaborate way many of the jokes play out. The rush-week rituals are elongated in a way that becomes more amusing than the actual jokes being delivered. The machinations of some of these setpieces (most notably a bachelor auction and lapdance/heist scene) would make the Final Destination filmmakers proud.

The movie should have leaned into its comic convolution instead of pulling up for sporadic bouts of earnestness. Any time the script aims for an emotional beat it rings phonier than last week’s bologna. Movies aren’t fun when you can see the strings on the puppets. The puppet masters, writers Ted Sperling, Benjamin Sutor, and director-co-writer Scott Zabielski, are clumsy  Where’s the Money proves to be as generic as its title implies. It’s packed full of people you’ll recognize (Josh Brenner, better known as Big Head on Silicon Valley, is one of the frat boys) and that helps even out the ride. Still, you’re better off leaving this one on the shelf.