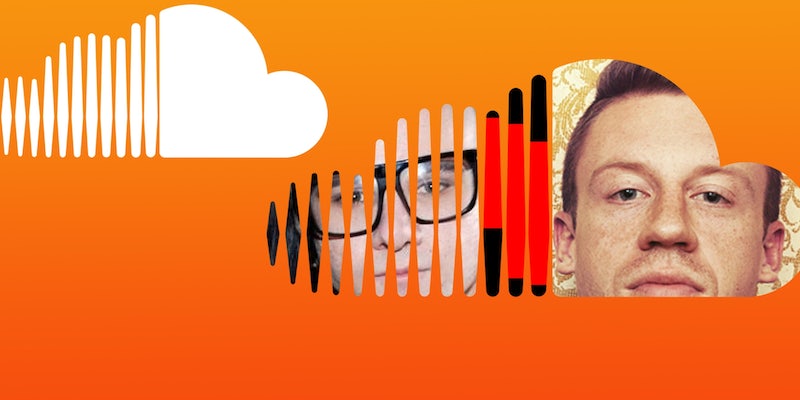 From Macklecore to Biggiewave, the surreal world of Weird SoundCloud

On a recent Saturday night, I got lost in a SoundCloud, shuffling from one fluffy mp3 to the next: A “Don’t Worry, Be Happy”/”Black Skinhead” mashup, into an acid-jazz Seinfeld meme theme song, and then a “family friendly” version of “Boss Ass Bitch.”

By the time I’d arrived at “Gangnam Style” reimagined as a 50-second standup bit, I’d reconsidered and mourned several forms of popular music, and realized we’ve come to a point where there’s a “weird” parallel for nearly every form of social media.

The Berlin-based SoundCloud initially existed as a platform for artists to exchange and collaborate on recordings, but in the last couple years, its utility has shifted. Last month, Angel Haze used it to drop a bomb on her record label.

Kevin Wang used it to create the “best drops ever” collection, a series of EDM buildups abruptly severed by completely disparate samples. It was all about killing the anticipation.

“I would say [weird SoundCloud has] been around in the last one to two years,” Wang explains. “More so in the last year, however, as the EDM blogs have picked up more on and more on quality tracks.”

And those blogs can provide material to build upon or rip up. There are the mashup and parody artists; those disrupting the flow of popular music, like DJ Detweiler’s “flutedrop” version of “Wrecking Ball” and Shaliek’s marriage of Bruno Mars and Korn.

Then there’s the curious Macklecore meme, which consists strictly of Macklemore mashups. There are two compilations dedicated to these mutant creations, as well as several reimaginings of “Thrift Shop,” like this nearly screwed-and-chopped “nightcore 1989” version. Here’s a song splicing Macklemore with “Macarena” for good measure. It’s actually an improvement:

The song’s creator, Ideaot, says Macklemore is “just funny,” and he describes SoundCloud almost like a micro-social network:

“I think the scene is largely just people who are friends with each other. I’m only friends with a few users on there, but then some of them are friends with other users. Also, I’d say a lot of the current users were also active in the YouTube Poop community”—referring to a trend of purposefully annoying video mashups—”a few years ago. I made most of my SoundCloud friends on Twitter.”

Ideaot explains weird SoundCloud sprung from Weird Twitter, but that it’s “not really a subculture, it’s just another in-joke.” He adds that the “SoundClown” tag was likely made up by a fellow named Dicksoak, who’s responsible for the excellent sub-subgenre “Biggiewave,” which samples the Notorious B.I.G.’s Ready to Die.

And while not everyone’s a DJ on the weird SoundCloud, there is a certain stance.

“I think that many of the sounds people are putting up are in fact a critique of EDM culture, especially recently,” he says. “Personally, I think that most EDM is just too unoriginal. ‘Animals’ [by Martin Garrix] was one of the biggest hits of 2013, and it’s super generic. A lot of things are just uploaded because they sound funny, though. I think that’s the reason people use [the] Death Grips song so much.

“Also, I think Skrillex is more of an inside joke than anything since he’s like a go-to electronic non-music ‘this sounds like someone puking’ musician for everyone on the planet.”

Angular, white DJs like Martin Garrix, Skrillex, and Avicii are fair game in the Cloud, and there are a lot of music-nerd revelations, like that Boards of Canada and Super Mario Brothers actually go together.

Weird SoundCloud is a very young, mostly male place, populated with users who’ve possibly only known life with an Internet connection. Much of it is deconstructing and reshaping memes and popular music, recontextualizing the sacred texts of millennial chat rooms.

It’s an in-joke looping forever, and it’s easy to get lost in the loop.