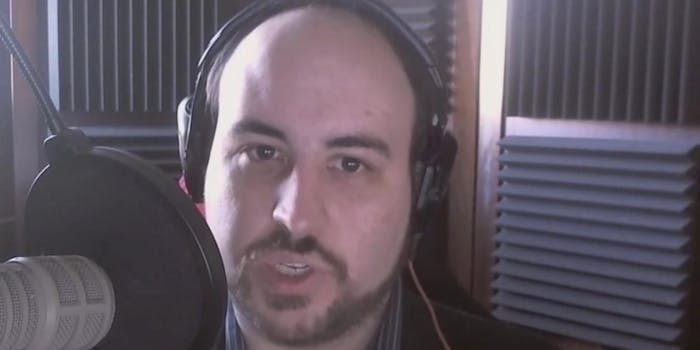 The popular online personality will continue to fight with chemo treatments.

TotalBiscuit may be facing an unfavorable cancer diagnosis, but it’s not game over for the YouTube gamer, who’s vowing to fight back.

John Bain, who bills himself as the “#1 PC Game Critic” to his 2 million YouTube fans, revealed in a tweet this week that his cancer had spread and become inoperable.

Well, I don't know if there is really a right way to tell people this, so I guess here goes. The CT did not (cont) http://t.co/2rAg7x9OFI

He also announced the disbanding of Axiom, his Starcraft 2 esports team. Axiom has been struggling for some time now, after being prohibited from taking part in the StarCraft II World Championship Series and underperforming through the year. A planned revamp has been put on hold. The team provided the following the statement:

“While Axiom is dissolving as a team, we will always remain a family supporting each other through the high and lows. We thank each and every one of our fans for their support over the past few years. As always and forever, Axiom Fighting!”

The full text of Bain’s Twitlonger revealed that the cancer he’d been battling since 2014 has moved to his liver and that average life expectancy is two to three years. Bain said he “fully intend(s) to be the outlier.”

Well, I don’t know if there is really a right way to tell people this, so I guess here goes. The CT did not come back negative. The cancer in the bowel is gone, but spots have appeared in my liver. They’re not operable and there’s no cure. Average life expectancy is 2-3 years, though there are outliers that live much longer. I’ll be back on chemo in a few weeks, with the goal of pushing it back and keeping it there for as long as possible. I fully intend to be the outlier, the average is this way because most people that get this are old and not strong anymore. Who knows what they’ll come up with in the next decade? I intend to beat it for as long as possible. Gonna need some time to process all of this. I don’t really feel anything right now. Thanks.

Thank you @Totalbiscuit for always being a strong but fair voice able to thoughtfully consider all angles on a given issue! #TakeThisTB

This news about Total Biscuit is heartbreaking, one of the most entertaining youtubers about. All the best to you @Totalbiscuit

I'm so, SO sorry about what's been found out about @Totalbiscuit. I think I might tear up, you ARE one of my favorite personalities

They also wrote a collective letter to him on site TakeThisTB, reminding Bain that he wasn’t “going it alone.”

You’ve always stood up for us. You watch out for us. You make sure the industry does right by us. We noticed, and today we all queue as Support. Today, we’re all Priests, and Shaman, and Druids. We have our Heals, our Lifeblooms, our Power Words, and our Potions ready. We’ll make sure you get to bubble hearth home.
They say it’s dangerous to go alone. You’ll never have to go alone, John.

Bain is far from the first digital celebrity to share his cancer battles online. Fitness expert Furious Pete has been sharing his battle with testicular cancer with daily updates on his treatments. Others like Jesse Case have turned cancer battles into content via a podcast. Bain has been continuing to update his fans on his status in between business-as-usual gameplay since announcing his new diagnosis.