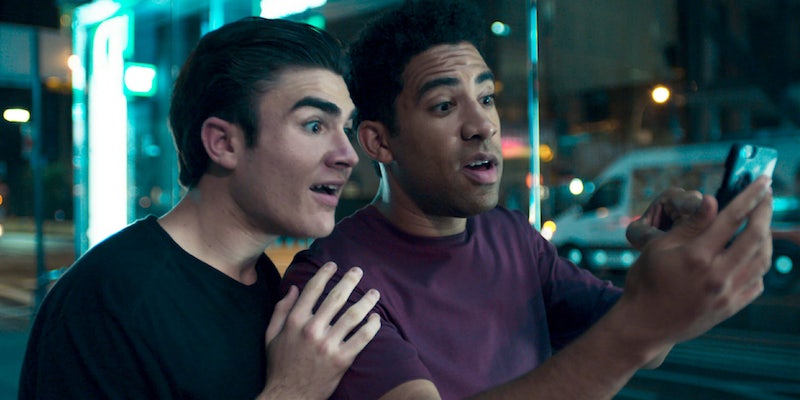 Netflix’s ‘The After Party’ is all reference and little substance

The movie gets off to a promising start, but then loses the flow.

Netflix‘s The After Party is a “one crazy night” movie. It’s a buddy movie. It’s a coming-of-age-movie. Unfortunately, it’s not sure which one to focus on.

It’s a “one crazy night” movie produced by WorldStarHipHop, which makes it a little more unique: In the opening moments, aspiring rapper Owen (Kyle Harvey, aka KYLE, who is 25 but plays a teen) freestyles in front of a bathroom stall for someone he thinks is a producer, though it turns out to just be an intern. His best friend Jeff (Harrison Holzer) is his hype guy and manager, though he doesn’t really know what he’s doing. They talk about “Soundcloud rappers” and finding the “next 21 Savage.”

Owen is later given a chance to freestyle for some big names, but Wiz Khalifa’s weed makes him too high, he pukes on Wiz, and has a seizure on stage. He quickly goes viral, because that’s what would probably really happen.

So the screen-first hip-hop culture The After Party exists in, and which WorldStar helped shape, is sort of sketched out. Success is measured in Instagram followers and hits. Owen’s now known as “Seizure Boy” and thinks his career is over, but by the number of people who recognize him and call him “Seizure Boy” in public, it’s clear that’s not true. It’s odd that his virality isn’t funneled into something in this content-hungry ecosystem, at least for 15 minutes. The incident even starts its own viral dance craze. (There’s also no explanation for the seizure. Does Owen have epilepsy? Does Wiz Khalifa’s weed do this to a lot of people?)

Director Ian Edelman’s HBO series How to Make It in America was another aspirational tale—albeit about the NYC fashion scene—that focused on two friends. The After Party wants to be a buddy movie, but it never goes that deep into the nuances of Jeff and Owen’s relationship beyond rap. As is standard for coming-of-age stories, Owen has been lusting after Jeff’s sister Alicia (Shelley Hennig) since they were kids. Because we don’t learn much about her, either, it’s not clear why he’s invested so much time, and this is driven home when she and Owen attend a party and Alicia’s new boyfriend is a man-bunned festival douche named Brooklyn.

Unfortunately, the movie indulges the “guy who has fixated on the same girl his whole life” trope, and it takes away from Owen and Jeff’s relationship and the movie’s momentum; a woman even calls Owen out for it when they’re trying to get into the big French Montana afterparty, where Owen will certainly get a record deal. The guys visit a strip club (DMX is there, with a boner!) to get attractive women for the afterparty, and Jeff fixates on Blasia (Teyana Taylor), who eventually agrees to go with them. During the afterparty, she gives Jeff the “be yourself” speech and that’s pretty much the extent of her role, which is disappointing. Women are conquests, or they’re there to give men confidence.

The After Party doesn’t have the weight of a movie like 8 Mile, despite’s Owen’s freestyle diss during the afterparty. (Mobb Deep’s “Shook Ones Part II” is featured right after that scene, possibly as a nod.) In fact, Owen spends much of the film believing he won’t get signed and instead chasing after Alicia. Any plot holes are filled with rapper cameos, and yes, DJ Khaled is unfortunately one of them.

The movie ties up all its loose ends a little too neatly, and the result is a product that’s more about reference than narrative or insight. Early on, a train conductor (played by Jadakiss) riffs with Owen and Jeff about Rakim and hip-hop history, and he tells them: “The culture is dying and y’all are the future.” But the movie doesn’t do much to address that.