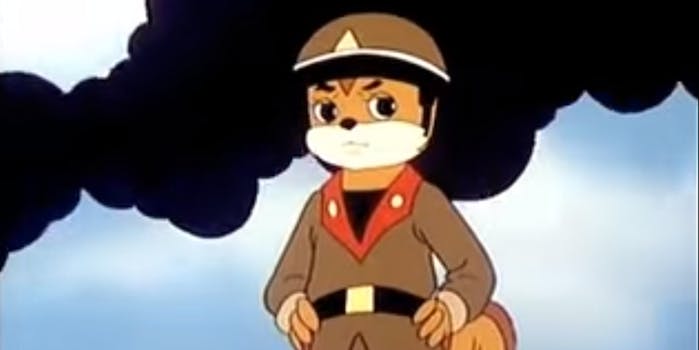 For many Americans, Saturday morning cartoons include the antics of Bugs Bunny and the never-ending chase between Tom and Jerry. They’re the characters that have survived for generations. In other parts of the world—namely North Korea—the equivalent anthropomorphic children’s cartoons take form as squirrels and hedgehogs.

While that all sounds typical, North Korea’s most famous children’s cartoon, Squirrel and Hedgehog, has a more unorthodox theme: blatant propaganda.

Imagine sitting around the television after school, with your younger sibling plopped next to you. Flipping to the nation’s public TV channel, the introductory scene starts playing. Already the propaganda starts seeping in. “Hello young comrades!” two squirrels greet, saluting you. They’re giving you a rundown of the story from the episode before, all while riding atop a massive, mobile tank. 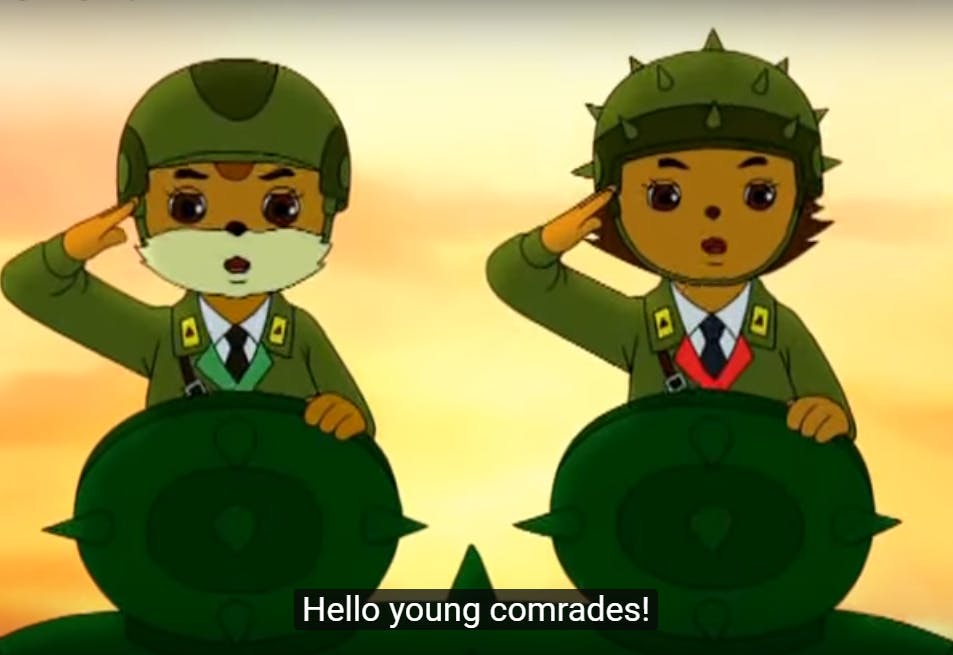 Under the guise of cute, talking animals, the characters’ military uniforms and calling their young viewers “comrades” seem subtle. But don’t be fooled—the tame introduction sets no such precedent for the rest of the show.

Squirrel and Hedgehog is the first exposure to war and conflict for most North Korean tots. And the writers waste no time introducing them to the harsh realities. There’s lots of on-screen violence—guns blazing, bullet wounds—and gratuitous cursing. For a country so uptight about censorship, it seems Squirrel and Hedgehog got a free pass.

Over 30 episodes are uploaded to YouTube in remastered form. Considering the show’s sporadic production over the years, that may very well be the entire series. The videos were uploaded a little over two years ago, but awareness of their existence was quiet until the Los Angeles Times noticed.

For any curious non-Korean/English speakers, about half of the episodes are available with subtitles. So of course, I watched a few.

I started at the beginning. According to the description of the video, the first episode aired in 1977, hence the dated animation. The cartoon heroes, the namesake squirrels and hedgehogs, represent the North Koreans. The squirrels are the leadership, the hedgehogs are the soldiers, and they also have a squadron of ducks that make up their navy. Villainous weasels oppose Flower Hill, depicting North Korea’s rivals, the Japanese.

The opening scene from the series shows the sleeping village of Flower Hill, and two squirrels on night guard. The squirrels hear noise, and literally within the first minute, a fiery inferno engulfs the peaceful Flower Hill in the middle of the night. Silhouettes of weasels attacking, capturing, and dragging ducks across the horizon burn into the background of the flames. After such a horrific sight of pillage and plunder, the guards rush to the village leader and effectively evacuate the rest of the residents. 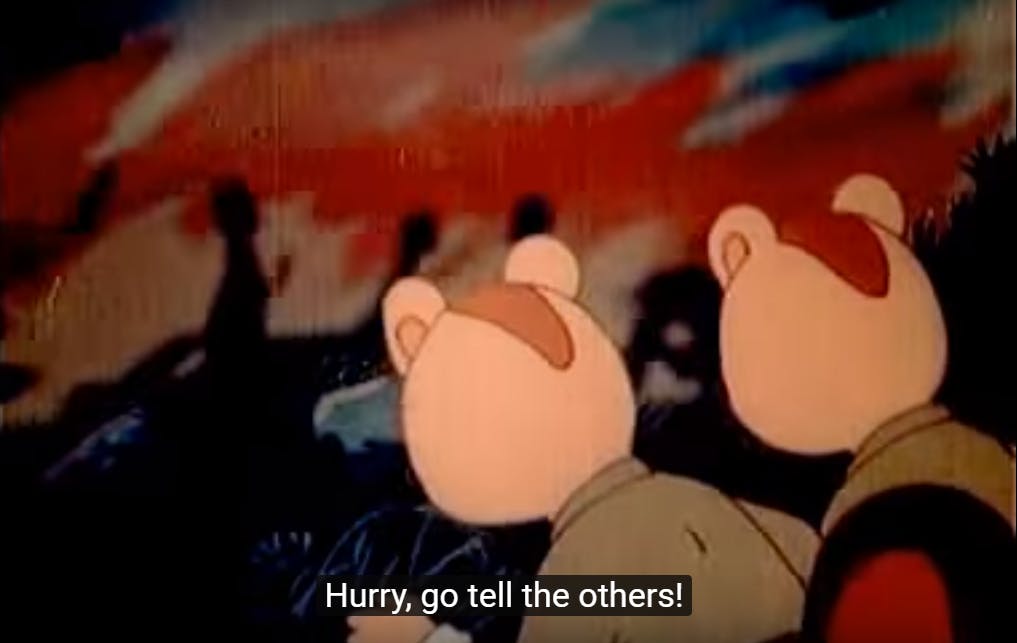 They’re then left to rebuild their home the next morning, having to start from scratch. That’s when a new character is introduced: Bear. Friendly and willing to help, Bear represents the Soviets. Bear’s personification is just about as stereotypical as you’d expect—large, burly, and pretty much drunk at least 50 percent of the time. Long story short, Bear’s drunkenness becomes his downfall when too much booze renders him unable to help defend a surprise attack from the weasels. Ironically enough, the alcohol was a “gift” from the mice (the South Koreans), who are pretty much spies for the Japanese.

From there the series parallels the journey of the North Koreans to become a self-sufficient nation so they can just live peacefully under the rule of their Great Leader.

Unfortunately episodes two through nine aren’t subbed, so I don’t know what happens in the nascent stages of the storyline. Instead I skipped ahead to episode 14. In a word, I would describe the episode as intense, and it actually reeled me in. But that’s the thing—I forgot I was watching a children’s cartoon. With all the action and drama, it seemed more like a TV show that an adult would tune into that just happened to be animated. And I’m not talking Family Guy or Simpsons—imagine Breaking Bad as a cartoon.

I skipped ahead to episode 31. This one is more recent and flaunts clean, modern animation. The Americans make their debut in the later episodes as wolves (not a bad depiction, all things considered), but it’s just as intense. It’s revenge-driven, full of lying, deceit, and nonchalant execution.

Its brutal imagining of Americans as the bad guys helps explain why many North Koreans hold the worldview that they do, which apparently is indoctrinated in them early and often.

If you’re interested in watching some episodes for yourself, the entire series can be found here, though these videos have no English subtitles. Those can be found at this link.