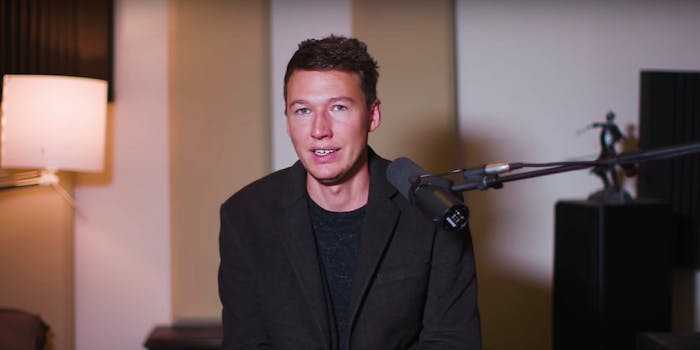 He's known for his viral remixes.

YouTuber Pogo—who’s famous for his Disney-themed remixes—said Thursday that a now-deleted video of him making homophobic comments was created specifically to “grind the gears” of liberals who “demand safe spaces” but then attack folks they disagree with.

A video of Pogo—whose real name is Nick Bertke—addressing the fact that his channel, called “Fagotron,” is named after a homophobic slur began circulating around the web on Thursday.

“I’ve always had a very thorough dislike of homosexuals. I’ve never liked a grown man acting like a 12-year-old girl,” he said in the deleted video, according to Mashable.

Bertke also does a fist pump when talking about the shooting at Orlando’s Pulse nightclub.

Obviously, fans and other viewers who happened upon the video were enraged by his comments.

Just found out that the guy who makes dope Disney mash-ups (Pogo), actually believes that gays are abominations and even celebrates their murder (e.g the Orlando shooting). I'm all about separating the art from the artist but this just ruined all his songs for me…

Every once in a while it's depressingly refreshing to have a content creator you've enjoyed for years to come out and spell out what a horrible person they are. Thanks Pogo, now I don't have to wonder whether I can separate the art from the artist, because you are the worst.

Pogo is cancelled. You don't cheer for the massacre of innocent gay people and ever be considered a functioning or rational human being ever again.

Pogo: *makes amazing music for many years*
Pogo: aight I gotta be honest with ya, I hate gays! I just really hate gays. Cheers!

Me: you, you know you could have just like, NOT said that

Turns out, that’s exactly what Bertke wanted. In a second video on his personal channel, he said he enjoys baiting folks who advertise themselves as advocates for tolerance and then attack people who have different views from their own.

“There is a culture of people who have made themselves very know, especially around the time of Trump’s election, who are the sort of people who demand safe spaces,” he said. “They demand trigger warnings at universities. They call themselves adults but they require an environment akin to a crate.”

Bertke isn’t a fan of these people, especially because he believes they are hypocritical in their actions.

“You do not have a monopoly on morality, no matter which party of social movement you identify with. I can’t stand that sort of person and God knows the internet is full of people like that,” he said. “The way I draw these people out into the open, and have done for several years, is to write and say things that I know will grind their gears. I’ve written blog posts about women, I’ve made a video about gays.”

The blog posts about women he refers to were written in 2015. In one he describes the “evils of feminism”—it “raises a breed of self victimizing gold diggers,” a “camouflaged push for gender supremacy,” and “self-entitling social status posing as a humanitarian ideology”—and in the second, he said that women have privilege in society that men don’t have.

He added that many of his friends are gay and that he is bi-curious, so he sees a “degree of irony” in his comments. Inevitably, however, he conceded the behaviour was “naive.”

“I feel very strongly that it’s been naive behavior on my part,” he said. “If I’m going to tuck my tail between my legs and admit anything, it’s that these posts, these videos, these things I’ve made for the sake of being edgy have not contributed to any productive conversation.”

Folks weren’t impressed with his explanation.

Watching Pogo's "response" video to people's reactions to his homophobia.

First three minutes is basically him trash talking liberals and anyone who thinks cheering for the Pulse nightclub shooter is in poor taste.

Next minute is spent talking about how He Has Gay Friends Too.

I wouldn't even call it an apology cause he never said "I'm sorry for being a homophobic piece of garbage" pic.twitter.com/e7Mir2Cbqp