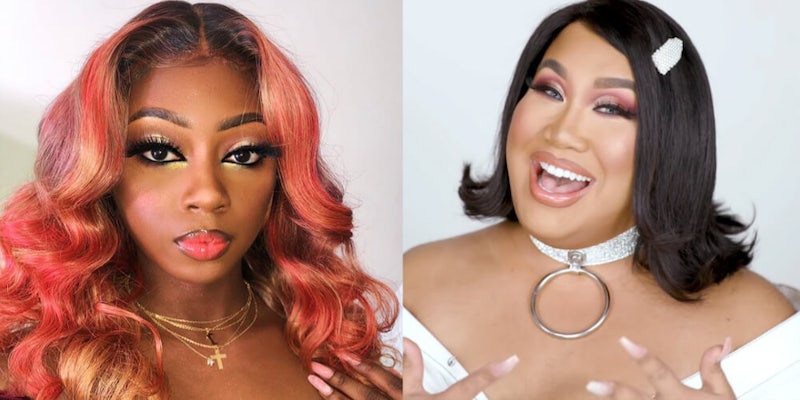 YouTuber Patrick Simondac a.k.a. Patrick Starrr is a trailblazer in the beauty community, with more than 4 million YouTube subscribers and hundreds of fabulous make-up tutorial videos. And now he is being accused of stealing a concept from a Black, lesser-known influencer.

Chelsie Worthy (@wvrthy) called out Starrr and YouTuber Manny Mua, for stealing a unique editing style she uses. She also explained why she feels unwelcomed in the beauty industry as a Black woman.

“Damn this is heartbreaking. I was a Patrick Starr Stan. This is the ugly industry we are in, though. I have NEVER been welcomed or wanted and this fully solidifies that. It’s never ‘groundbreaking’ until ‘someone else’ does it,” she quote-tweeted Starrr’s video, which she alleges copies her “traptorial” style.

In the recently uploaded videos by Starrr and Mua, the makeup artists sing along to a song while applying their makeup–and the editing follows cues from the music’s beats. Worthy is accusing the pair of stealing the style from her traptorials, which first popped up online in 2018. Worthy’s traptorials play with a mix of editing, animations, music, and movements. Worthy and her traptorials were even featured in a Popsugar article, which referred to the style as “the best damn thing you’ll see all day.” But neither Starrr nor Mua credited Worthy with originating the concept.

In a tweet thread, Worthy explained just how heartbroken she was to discover the artists were co-opting her style without offering her any credit after she spent months perfecting it. She also described numerous examples of feeling “unwanted” and “unwelcome” in the beauty industry.

“They were mean, rude, and unwelcoming as hell. I don’t have a stylist so I dressed myself for the event. And I have a very tomboyish style. One influencer said to me ‘Wow. Wish I could came dressed like that’ and looked me up and down in disgust,” she wrote about an interaction she had with a fellow beauty influencer at Beautycon, an event that brings together the most prominent faces in the industry and big-name brands.

In the thread, Worthy even alleged that a beauty influencer denigrated her style at the event by saying her traptorials were not real makeup tutorials and warned that the beauty community does not truly accept Black artists.

Another influencer pulled me to the side after she must’ve had one too many drinks at the after party, and said to me “I need you to explain the whole point of what you’re doing. What you do is not a real makeup tutorial. I just don’t understand the point”

“If you are an aspiring Beauty Influencer, ESPECIALLY if you’re BLACK. Don’t be fooled, we are not as accepted as they make us out to be AT ALL,” Worthy wrote.

Long story short if you are an aspiring Beauty Influencer, ESPECIALLY if you’re BLACK. Don’t be fooled, we are not as accepted as they make us out to be AT ALL

Now, under the hashtag #WeStandWithWvrthy, many are rallying behind Worthy to demand she gets the shine she deserves and to also celebrate her unique and innovative style.

“Stop stealing from black women! Sending love to the ORIGINATOR. We see you and we got you,” one user tweeted in support of the artist.

“The white gay culture vultures have started. We all know this girl created her style of makeup videos with the amazing edits. Give her her bloody credit,” another wrote.

Worthy’s supporters even flocked to Starrr and Mua’s Instagram accounts to demand acknowledgment for the artist, but so far, neither has addressed the allegations.

The Daily Dot has reached out to Worthy, Starrr, and Mua.