OMGWhizzBoyOMG is Sacha Baron Cohen’s best ‘Who is America?’ character

“Mackenzie Maple Donut, do not join Antifa. They support the killing of police officers. They support disorder,” Sacha Baron Cohen creation OMGWhizzBoyOMG says on Who is America? It’s a deliriously spot-on and side-splittingly funny bit from the series’ quiet hero.

The series has been a media sensation, producing the public disgrace, and sometimes even resignation, of political figures on a weekly basis. Cohen’s portrayal of Erran Morad, a Mossad agent turned Israeli lobbyist, has drawn the most attention, because the character is the perfect Trojan horse for catching Republicans (sometimes literally) with their pants down.

Morad, and other Who is America? characters like fashion photographer to the stars Gio Monaldo and so-woke-it-hurts NPR correspondent Dr. Nira Cain-N’Degeocello, are great vehicles for channeling the ridiculousness of the Trump era. But, OMGWhizzBoyOMG is the first character to appear on Who is America? who feels unique to this moment. 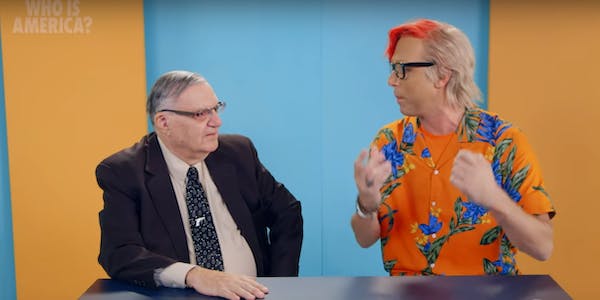 OMGWhizzBoyOMG is a Finnish YouTuber who has a channel dedicated to unboxing (opening and presenting) Shopkins, cornily cute anthropomorphized desserts. Shopkins characters have names like “Kooky Cookie” and “Lolli Poppins.” Unboxing is a big industry on YouTube. You can find videos of YouTubers unboxing variety of retail items with millions of views.

Unboxing videos often employ the twee, eager, graphic-heavy style of the most popular YouTube channels. The hosts are over-the-top, often playing cutesy for their much younger audience. Though unboxing is OMGWhizzBoyOMG’s specific lane, he is more broadly a parody of the current moment in Youtube video. Video game walkthroughs, makeup tutorials, and prank videos often have similar aesthetics with brightly colored sets and manchildren as hosts.

Watching OMGWhizzBoyOMG, you see flashes of PewDiePie, Rhett and Link, Miranda Sings, and a host of other YouTubers trying to figure out how to stay relevant as they grow older than their core viewers. With his makeup for WhizzBoy, Cohen has his artists emphasize every one of his 46 years, even though he wears a youthful dyed fauxhawk and overalls. This pathetic look offers us the cringing feeling when WhizzBoy dabs or tries to use modern slang that we get when aging morning show hosts or political candidates try to whip and nae nae or reference memes.

It’s is hilarious because his childish antics contrast with the masculine figures that appear in his unboxing segments. It’s no mistake the WhizzBoy’s first two guests were disgraced sheriffs David Clarke and Joe Arpaio, self-styled paragons of Blue Lives Matter toughness. These overly masculine figures are immediately rendered ridiculous once they set foot on Cohen’s set: When he convinces them to yell at Shopkins donut figurines, it’s comic gold.

The deeper comic beauty of OMGWhizzBoyOMG sketches doesn’t lie in cowboy guests, but in the contradictions within the character himself. Beneath the charming, if overwrought, facade, there lurks serious darkness and the comic heart of these scenes.

We quickly learn that OMGWhizzBoyOMG has some of the same political tendencies as his guests, and we realize that his unboxing channel might be a covert cryptofascist operation. With a smile, WhizzBoy delivers lines like “it’s a shame there weren’t brave sheriffs like you in Germany in the ‘30s,” and “I have over 43 guns. I’ve been collecting them for the upcoming race war.”

Not only is WhizzBoy racist, and fascist, but he is also a sexist and maybe a murderer. In his interview with Clarke, he casually mentions that his sister was murdered three years ago, and adds, “They didn’t find who did it because they didn’t look in the lake.”

These moments of fascism, racism, and sexism are funny in their own right when delivered with Cohen’s goofy cluelessness, but they also serve as a savage parody. How many YouTubers and streamers with a large audience of children have been caught up in racist or sexist scandals? PewDiePie, Ninja, Logan Paul, Jeffree Star, and Colin Moriarty are just a handful of the names that come to mind, and it wouldn’t take much digging to come up with many more.

As we watch OMGWhizzBoyOMG hide behind his nerdy facade as he references his past abuse of women, it’s hard not think of Chris Hardwick hiding behind his Walking Dead Funko Pops as abuse allegations fly at him. WhizzBoy deconstructs both the older generation’s devil-may-care masculinity that feels ridiculous today and the “woke bae” warm and cuddly male sexism of today. After the revelation that Aziz Ansari, Joss Whedon, Devin Faraci, and many other vocal, saccharine-sweet male feminists are hypocrites, this type of manhood has come to feel as useless and ridiculous as that of Arpaio and Clarke. 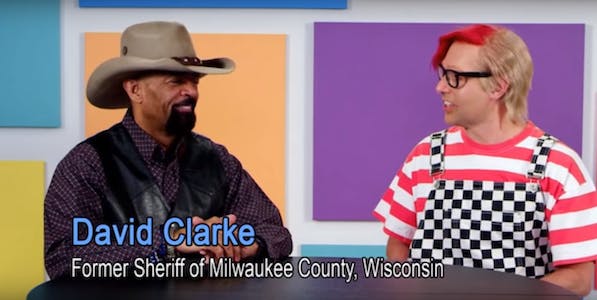 In these segments, Cohen is touching on a phenomenon that Jennifer Weiner identified in her 2017 New York Times opinion piece as “Men Who Never Grow Up.” By looking at examples as disparate as Brock Turner and Ryan Seacrest, Weiner detailed how men use immaturity to excuse the same sexist and racist transgressions that their leathery, bearded forefathers made commonplace in boardrooms and barrooms. She writes:

Start with YouTube, which is crammed with fellows in their 30s and 40s who have declined to put away childish things and have instead made their fortunes by singing love songs to their pillows or performing trick basketball shots. Millions of subscribers watch Rhett McLaughlin and Link Neal, both 39, eat bugs or play ‘Will It Taco’ with pine needles. Colin Furze, a 37-year-old inventor, with his 360-degree swing and his wearable Wolverine claws, is also huge.

OMGWhizzBoyOMG is the most brilliant of Cohen’s Who is America? characters because where most of his creations take aim at craven baby boomers, WhizzBoy is a cross-generational parody. He takes on the masculine drag perpetuated by baby boomers influenced by the Marlboro Man, Davy Crockett, and the Bounty Lumberjack, and the infantilization that so many younger men—be they gamers, comic book nerds, or unboxers—hide behind.

Cohen’s nihilism can be frustrating: He doesn’t offer any answers. But in the case of OMGWhizzBoyOMG, his rhetorical mockery is the perfect tactic because there is no “perfect” version of manhood. A man is true to himself, honest about his faults, and open to growth—and he doesn’t need to hide behind a 10-gallon cowboy hat or a donut figurine.