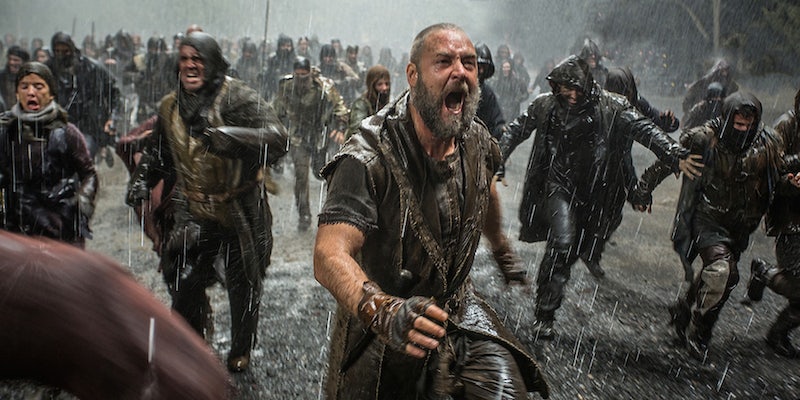 ‘Noah’ screenwriter explains why only white people appear in his movie

Apparently when they say the 'every man' they mean the 'white man.'

If you’ve seen Darren Aronofsky’s Noah, you may have noticed something a little weird about the semi-Biblical, semi-apocalyptic cast of the movie: they’re all white. Even the extras.

Hollywood has a long history of casting white actors to play the roles of Middle-Eastern characters in Biblical movies, from Charlton Heston in The Ten Commandments to Jim Caviezel in The Passion of the Christ, to Christian Bale and Aaron Paul in the upcoming Exodus movie. There’s really no excuse for this type of casting, although the obvious explanation is that filmmakers don’t believe a Bible movie can be successful without a cast of white movie stars to prop it up.

Luckily for Noah, its creators already had a ready-made rationalization for why Noah and his family were all very clearly caucasian: the movie isn’t set in a specific location or historical time period, meaning that no one could possibly criticize them for failing to cast non-white actors. Right?

Yeah, not so much. Noah may have gotten pretty good reviews so far, but it’s also inspired a lot of backlash from people pointing out that it’s incredibly weird to create a supposedly “universal” apocalyptic scenario in which virtually every non-white race has been erased without explanation.

In an interview with The Higher Calling, Noah screenwriter Ari Handel spoke about the reasoning behind the lack of racial diversity in the cast.

“From the beginning, we were concerned about casting, the issue of race. What we realized is that this story is functioning at the level of myth, and as a mythical story, the race of the individuals doesn’t matter. They’re supposed to be stand-ins for all people. Either you end up with a Bennetton ad or the crew of the Starship Enterprise. You either try to put everything in there, which just calls attention to it, or you just say, ‘Let’s make that not a factor, because we’re trying to deal with everyman.’ Looking at this story through that kind of lens is the same as saying, ‘Would the ark float and is it big enough to get all the species in there?’ That’s irrelevant to the questions because the questions are operating on a different plane than that; they’re operating on the mythical plane.”

In summary, white people are stand-ins “for all people,” and no other race could possibly qualify for “everyman” status. Ari Handel’s reasoning is that the only way to dispense with the issue of racism is to remove everyone who isn’t white. Asking what happened to all the other races is akin to nitpicking about whether the arc would float or not. It’s just silly, OK? “The race of individuals doesn’t matter,” which is why they made absolutely sure that all of those individuals were white. Or something.

Unintentionally, Handel managed to illustrate everything that’s wrong with the ongoing attitude towards casting actors of color in major Hollywood movies. White people are the norm, and everyone else is just a distraction. God forbid anyone attempt to be as diverse as the cast of the Star Trek, which debuted in 1966 and included a grand total of two non-white characters.

Handel frames the criticism of Noah’s all-white cast as a matter of accuracy, as if viewers are unfairly judging the movie for failing to represent the precise demographics of real-world racial diversity. In reality, a far more relevant criticism is to point out that both the film and its screenwriter are explicitly stating that the only way to tell a “universal” myth is to populate it with white people.

By characterizing Noah as a mythological story, Handel is digging a grave for his own argument. Much like the way Lord of the Rings legitimized the existence of dragons and orcs but failed to stretch the imagination to the concept of a black hobbit or an Asian elf, Noah’s lack of diversity tells us far more about its creators than about the message they were attempting to impart in the first place. If you actively go out of your way to cast white actors because you think they’ll be more universally identifiable to the film’s worldwide audience, then the problem is definitely with you, not with your critics.