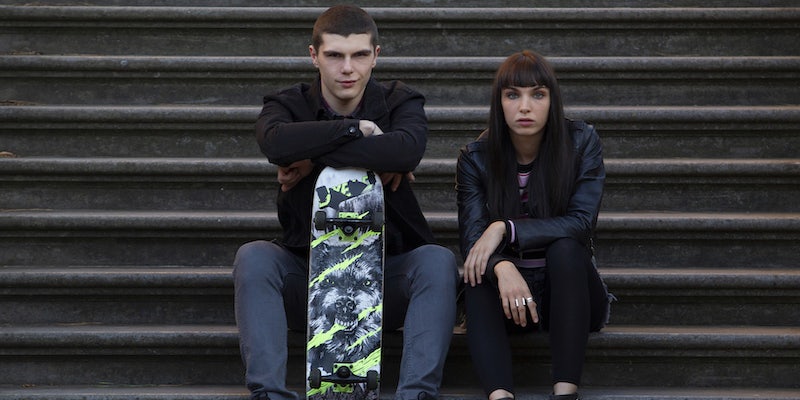 High school ain’t easy. That’s one of the universal truths of life and TV drama. You survived it, or you’re surviving it now, or you will survive it soon enough. The overwhelming awkwardness of everyone faking it till they make it can suffocate you.

Every good high school TV show I’ve ever seen captures that reality. As long as the characters have some truth to them, the plot can get as silly as it wants and still resonate. Netflix‘s Italian high school drama Baby, set at one of Rome’s best (read: richest) private schools, puts this logic to the test and flunks repeatedly. The show tackles evergreen themes like identity, class—you know, the usual. But it’s so overwrought that hardly anything sticks.

Chiara (Alice Pagani), the de facto lead among the ensemble, bookends Baby’s first season with voiceover. She tells the audience that to survive in this upper-middle class pocket of Rome, you need a secret life. It’s the kind of overly dramatic thing that passes as sage wisdom before you know better. Chiara and her classmates don’t know better, but the creatives behind Baby should. The story is riddled with the kind of melodrama that makes you roll your eyes rather than draws you in.

Chiara is a top student and track star, but that doesn’t erase her troubles at home. Her parents are breaking up, and she’s sleeping with her best friend’s brother. She finds something of a kindred spirit in Ludovica (Benedetta Porcaroli), who comes from a broken home and is infamous at school because of a sex tape. Between them, the new kid Damiano (Riccardo Mandolini), the principal’s son Fedeli (Brando Pacitto), and the rest of the cast, Baby covers a large swath of the high school ecosystem.

Everything here will be familiar to audiences, which is fine. The problem is that Baby has nothing interesting to say and no interesting way to say it. In its quest to explore the gritty, secret lives of the students, Baby finds only preposterousness. When Ryan had a stint as cage fighter in The O.C., that was the right kind of ridiculous. When Chiara and Ludo flirt with being escorts, it’s a face-palm moment.

The first season of Baby runs a merciful six episodes. But that brevity comes at the expense of fleshing out the story and characters. Without room to breathe, most of the big, dramatic beats don’t land with the intended impact. Making matters worse is the cliché-ridden writing. The bulk of the show’s writing comes from a group collectively credited as GRAMS, consisting of Antonio Le Fosse, Eleonora Trucchie, Marco Raspanti, Giacomo Mazzariol, and Re Salvador. GRAMS gets an occasional assist from Isabella Aguilar and Giacomo Durzi. This many cooks renders the meal bland.

The writing is the biggest culprit for Baby’s shortcomings, but the cast compounds these problems. Most of the main characters deliver believable solo moments, but they lack a spark when interacting with each other. Too many storylines revolve around characters hooking up and/or fighting, and there is a void where chemistry should be. That’s the Achilles heel of Baby. All of the best high school shows have casts and characters you want to see interacting, even when the plot gets convoluted. Baby is the opposite. It’s painstakingly obvious in any scene with confrontation. When Chiara has another hackneyed argument with her mother, you’ll beg for someone to burst into flames or rip off their face, Mission: Impossible-style. Anything to shake the characters from the doldrums of the script.

Take Fedeli, for instance. His story revolves him accepting his homosexuality. There is an early scene where his dad comes to say goodnight, then leaves and keeps the door open. Fedeli, without shutting the door or turning the light off, indulges in self-pleasure with his magazine held up for anyone to see. It’s the kind of contrivance that reeks of overwriting. Everyone else’s stories receive the same clumsy treatment. The show also takes itself so seriously that it’s hard to get on its side. At least Veronica Mars, Gilmore Girls, The O.C., and their 90’s predecessors had enough self-awareness to offer some levity.

After six episodes of cornball plot developments and laughably bad montages, I’m ready to forget Baby even exists. If you want good, soapy high school drama, save yourself the trouble and keep scrolling on the Netflix menu until you reach the Spanish show Elite. High school can be tough to get through, but a TV show about high school shouldn’t be.