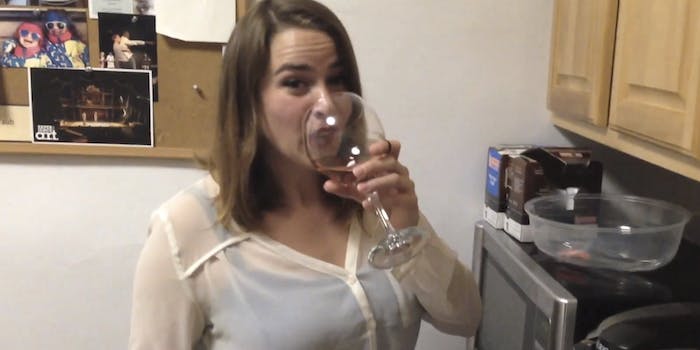 If it's too good to be true, it probably is.

The lure of creating a viral video sensation is still strong in 2014. A water-cooler worthy video could land you international recognition, TV appearances, and not to mention a paycheck from ad preroll and potential brand partnerships if you’re lucky enough to cross into the internet fame stratosphere. The path to such viral fame often starts with Reddit, and users are often sharing their own videos or the videos of others they find. That’s all fair game, unless the video you put up is actually a skit you’re trying to pass off as something unique and true to life. Thus was the issue with the “Drunk Wife Makes Grilled Cheeses” video, which Reddit swiftly debunked.

For a moment, it looked like a hilarious find. A man wakes up at 2:30am to find his drunk wife making “grilled cheeses” in the kitchen, except all she’s doing is melting string cheese on Goldfish crackers and randomly removing her clothes. The man films his wife and, boom, viral sensation. The drunk cooking formual worked for YouTuber Hannah Hart, what would possibly go wrong?

In this case, it’s all a fake. The “wife” in question is comedian Ashley Bez, who is not married according to the Reddit debunkers. Although this is not always the mark of a hoax, they also noted that the video was uploaded on a dummy channel with only the one video, and that the poster has been suspiciously quiet since he linked the video on Reddit.

However, a debunking doesn’t stop a video from going viral. Despite Reddit calling the video out and its comments being littered with disgrunteled truthers, the video itself accumulated more than 230,000 views in a single day. Unfortunately a viral hoax can be just as rewarding as the real thing.