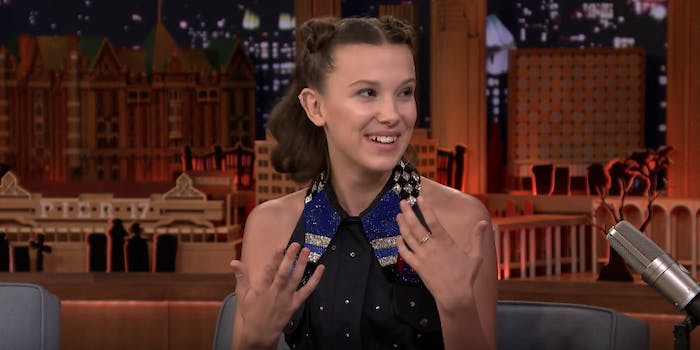 After one Stranger Things fan had a disappointing birthday party, Millie Bobby Brown is doing her part to make sure the same thing doesn’t happen next year.

Aaron Alambat recently invited eight of his classmates over to celebrate his birthday, and his parents helped him deck out their home with references to his favorite Netflix series. The cake had rainbow Christmas lights lovingly made out of icing, the fruit punch was labeled Demogorgon Blood, and everything was ready for a gaggle of kids to descend on the space. The only problem? Nobody showed up.

Aaron’s sister Ayen took to Twitter hoping to get some words of encouragement for her little brother.

my brother invited 8 of his classmates for his stranger things themed bday party & none of their punk selves showed up pic.twitter.com/Rw8wC5uNjo

TELL AARON THAT WE (his twitter fam) COMING NEXT YEAR 🤘🏾🙏🏾 I'm pulling up looking for him like pic.twitter.com/HQXE53gkiR

Maybe they were in the Upside Down. Anyways, happy birthday to your brother! :)

The tweet eventually made its way to Millie Bobby Brown, who plays Eleven in the Netflix series, and early Tuesday morning she tweeted that Aaron is “awesome.” The icing on the cake was that she also asked for an invite to next year’s bash on behalf of herself and her castmates: