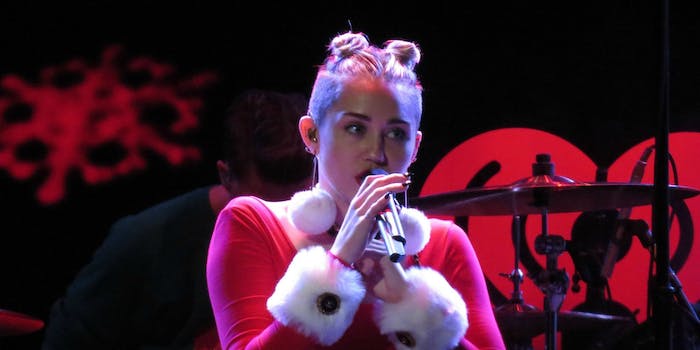 Photo via Melissa Rose/Flickr (CC BY 2.0)

Miley Cyrus just dropped a bomb about her sexuality

As her Happy Hippie Foundation launches with a Web-exclusive series of concerts shot in her backyard.

Miley Cyrus has changed, just a little, from her Hannah Montana days. We can’t quite put our finger on what is different about her. Maybe it’s the short hair or the constant tongue-wagging or the dilated pupils.

Whatever it is, she seems to be heading in a good direction. Cyrus made a media splash on Tuesday—not for appropriating twerk culture or for spewing an LSD-fueled rant on Instagram, but for launching a super-cool charity foundation to benefit LGBT, homeless, and at-risk youth.

The video, posted to the Happy Hippie Foundation Facebook page, is the first in a series of “backyard sessions” that will post exclusively on the page. Ostensibly, the videos will draw attention to the foundation’s outreach and fundraising. And Cyrus isn’t all talk; the foundation has already done real work on the ground prior to today’s unveiling.

The first round of Happy Hippie grant money went to a Los Angeles homeless youth drop-in center called My Friend’s Place. The foundation set the center up with a full two years of meals and snacks, clean socks and underwear, and other services for its homeless youth population.

But Cyrus made one more thing clear when she announced the foundation in an interview with Out magazine: Miley Cyrus—though not explicitly labeling herself—appears to be genderqueer.

“I didn’t want to be a boy,” she told Out magazine. “I kind of wanted to be nothing. I don’t relate to what people would say defines a girl or a boy, and I think that’s what I had to understand: Being a girl isn’t what I hate, it’s the box that I get put into.”

Cyrus came out as queer (or at least, non-straight) just yesterday in an interview with the Associated Press, telling a reporter that not all of her romantic relationships have been heterosexual. But when she stated today that she also doesn’t identify with any particular gender, suddenly so much about Cyrus just made sense.

It’s not just amazing that a celebrity is putting their fortune to good use helping queer kids get off the streets; it’s also important for gender non-conforming youth to see a pop culture icon state that it’s OK to opt out of gender altogether. In the light of Bruce Jenner coming out as a trans woman—watched by 17 million people—gender transition is becoming a household concept that most people have at least a basic understanding of. But sometimes lost in the growing discourse around trans issues are the genderqueer, genderfuck, and gender non-conforming people who decide that having to pick one side or the other just isn’t for them.

According to the Genderqueer Identities Tumblr, most genderqueer people identify either with both established genders (female, male), fall somewhere in the middle of the spectrum, or feel that they exist outside of concepts of gender altogether.

Miley isn’t the first celebrity to identify as non-binary when it comes to gender, but she’s definitely the most well-known. It would make her a pioneer—as other popular figures who have identified as genderqueer include comedian Eddie Izzard, who identifies as a transvestite and has called himself “a complete boy plus half girl,” and rapper Angel Haze, who announced on Twitter that they identified as “agender” and preferred the pronouns “they/them.”

The impacts of Miley’s foundation, her fluid sexuality, and her non-binary gender identity, are sure to be huge for LGBT youth. But more importantly, it’s a nice change of pace to see a massive star put their money where their mouth is.

Update 11:29am CT: Miley Cyrus responded to this story on her Instagram account: “NOTHING can/will define me! Free to be EVERYTHING!!!”

Correction: Miley Cyrus has publicly expressed a lack of gender identity, but she has not explicitly labeled herself genderqueer.

Photo via Melissa Rose/Flickr (CC BY 2.0)