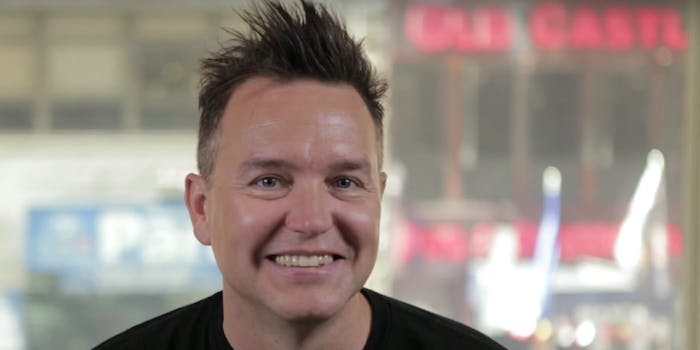 Was the band's frontman a secret military strategist all along?

Don’t bother searching for that nugget of information on Wikipedia. Like most high profile and classified military operations, the information on the project remains top secret. But Hoppus wants credit for his strategic advice on the capture of the Iraqi dictator back in 2003, Stereogum reports.

So why are we only finding out about this information some 15 years later? Well, no one thought to ask Hoppus about his involvement in Operation Red Dawn, which is crazy considering the moment I heard about the daring capture, I said to a friend, “I’ll bet 1/3 of Blink-182 is behind this!” But he relayed the story in a Twitter thread asking people for their implausible but true stories.

Shockingly, Hoppus’ idea for smoking Hussein out of his hiding hole did not involve giant speakers blasting “All the Small Things” until Hussein eventually tossed up the white flag. But Hoppus says he suggested blasting time stamps out of human hearing range, which is almost as catchy.

On an aircraft carrier in the Persian Gulf, I told a Navy Admiral on his way to meet with the Joint Chiefs of Staff my ideas on how to capture Saddam Hussein.

At the time, Hussein was in hiding but continued releasing videotaped messages to his followers. My idea was to have trucks with big speakers drive around BLASTING time code just out of frequency range of human hearing, but within the dynamic range of the video camera’s microphone. When Saddam released a tape, he would have inadvertently recorded the time code.

Using the time code, you could go back and pinpoint a general radius from where the truck was. With that information, you start the search. Also, knowing the general area of the recording, you can bring in more trucks to canvas there, and if you don’t find him and he released another videotaped message, you can use the multiple trucks’ time code for triangulation, revealing his exact location.

The real puzzler in all this isn’t so much Hoppus’ involvement, which could very well be true, but in what the hell Hoppus was doing on an aircraft carrier in the Persian Gulf. It turns out that Blink-182 played a concert aboard the Navy’s USS Nimitz in August 2003.