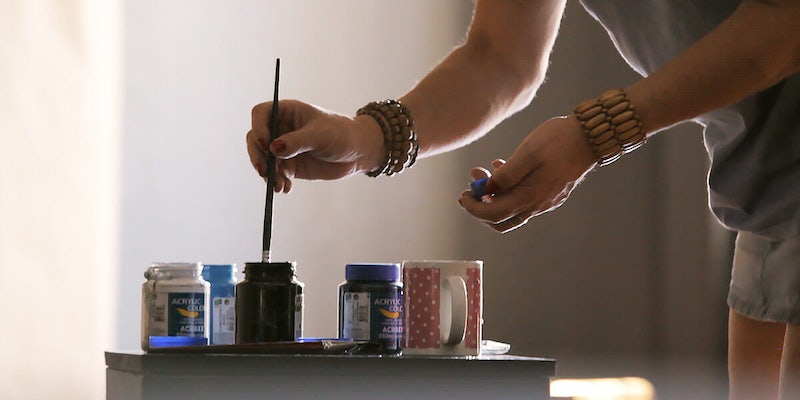 Netflix doc ‘Laerte-se’ unpacks the pain and bliss of transitioning

Celebrated cartoonist Laerte Coutinho pulls no punches about her journey.

In the Netflix documentary Laert-se, comic strips depict the inner workings of a Brazilian cartoonist as she comes to terms with her gender identity. The device serves two purposes: Informing the audience of artist Laerte Coutinho’s thoughts, and acting as a way to tell this searing, real story in a straightforward manner.

Laerte is initially hesitant to be intimately honest with documentarian Eliane Brum, but the more she does, the more the artwork exposes her thoughts and desires.

It’s an effective storytelling device that feels appropriate given the subject of the documentary. When the doc begins, Laerte exchanges emails back and forth with Brum. Over the course of some persuasive responses, Laerte eventually agrees to an interview. Laerte and Brum talk throughout the duration of the documentary, giving an in-depth look at Laerte’s transformation—and what that process actually means for her.

Laerte and Brum talk about the very nature of identity and gender. She talks initially about the simple steps. She goes into detail describing shaving her legs for the first time. How, step by step, she started to uncover who she truly was. As comic strips demonstrate, the real Laerte was there the entire time, hiding underneath the burden of her former self.

Of course as a public figure, Laerte’s transitioning was anything but private. The documentary features footage from gallery openings, interviews, and Brazilian talk shows where Laerte is very open about her transition. There is no detail or parcel of information, no matter how minuscule, that is left discarded.

As a matter of fact, the doc routinely explores daily life for Laerte, including showering, finding the right clothes, and even interacting with her family. There’s a fun, awkward moment where Laerte is arranging a meeting with her son.

But Laert-se is more somber than hysterical. She’s open about the loss of her son, Diogo. She describes her son’s death as a transformative moment that helped her realize who she really was. In her comic strips, she draws Diogo as a character also coming to terms with their gender. It was Diogo’s passing and eventual translation to comic strip form that helped Laerte reach catharsis. Her comics here describe death as an act of life, where the loved one is always present as an idea.

Laerte goes into great detail here. She’s not just a subject with a high-profile background, but a deeply meditative thinker. It is clear her son’s passing was more than emotional catharsis, it was an awakening of her soul. But the documentary doesn’t stray from the backlash—in the public spotlight, or at home. Laerte’s son Rafael Coutinho, who is also an artist, continues to refer to Laerte as “Dad.” With her grandson, she is “Grandpa.” (“There are already nine other grandmas,” Rafael says.)

Brum is not shy about uncovering personal topics. Brum asks if she plans on having gender reassignment surgery, and Laerte initially seems against the idea. She describes that just because you don’t have the requisite parts, it doesn’t mean you’re not a woman. This is where Laert-se succeeds. It explores the nuances of someone of Laerte’s age and stature undertaking this emotional journey, and doesn’t hold back.

By both the documentary’s staging and Laerte’s own admissions, we’re left to wonder if she truly feels comfortable in her own skin without the reassignment surgery. She consults a surgeon about breast implants, even though a friend brushes the move off as “unnecessary.” The documentary and Laerte argue that being “completely comfortable” is not the point.

Her father is dismissive. She accepts individuals still referring to her as male, such as her beautician and son. She writes it off as “part of the process.” She’s humble when she doesn’t need to be.

As unfiltered as the documentary gets, it ends on an open-ended note. Laerte’s son, Rafael, is no closer to acceptance. Laerte is still coming to terms with her own body, still on the fence about reassignment surgery. But there are certainly moments of joy.

One of the final scenes finds her naked, sketching another transgender woman, who is also exposed. Laerte has come a long way from hiding behind her computer screen, afraid to reveal even the simplest factoid. There is no censorship, and no special editing of the footage. She is not concealed, but presented exactly as she is. For a couple of long, important moments, she is happy.

Laert-se is not interested in answers. It leaves both the main subject and the audience exposed to the idea that these questions exist—and must be asked more often.