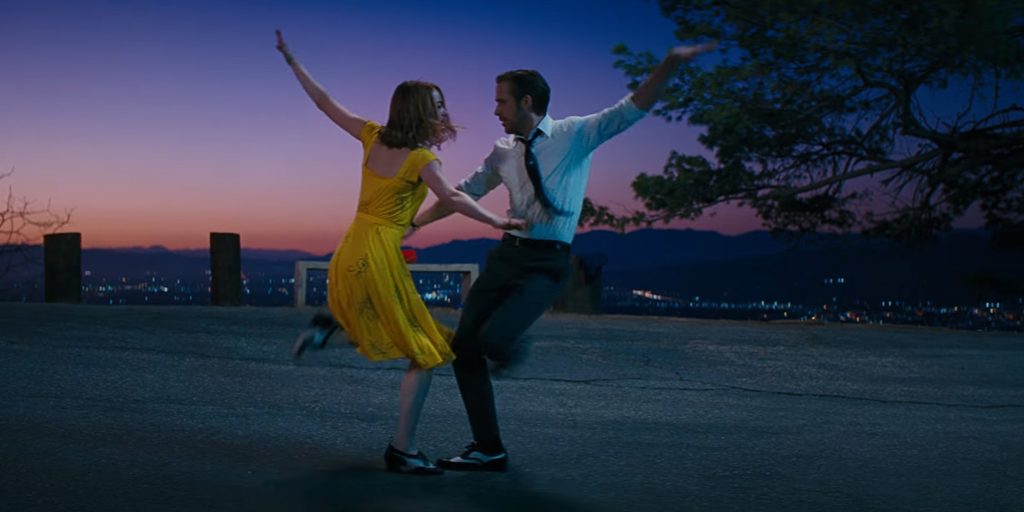 Don’t underestimate the value of nostalgia in ‘La La Land’

'La La Land' works because the story it tells should be desperately familiar to viewers in 2016.

This article contains spoilers for the films La La Land and Paterson.

La La Land is a movie obsessed with the past. Despite taking place in the present day—smartphones and Priuses included—the film is awash in nostalgia for the musicals that made your grandmother cry. Everything from the soundtrack to the title cards to the ballet that concludes the film is intricately designed to evoke the titanic scope and outdated optimism of Singin’ in the Rain (RIP Debbie Reynolds), Guys & Dolls, and An American in Paris.

While using (or abusing) nostalgia is not a very unique filmmaking tool, it works best when it reminds us of who we are now, not who we were or who we imagine ourselves to have been. La La Land is a gorgeous, sweeping tribute to the 1950s Technicolor era, but its clearest separation from the present day is not in the Gershwin-esque strings or its ability to include tap dancing unironically in a meet-cute. La La Land works because the story it tells should be desperately familiar to viewers in 2016.

La La Land’s nostalgia for a bygone era is neither ironic nor gimmicky.

The premise of La La Land is dead simple: Actress Mia (Emma Stone) and musician Sebastian (Ryan Gosling) fall madly in love while each vying for their big break in Hollywood. After a lovingly portrayed romance, it becomes clear Mia and Sebastian have warring definitions of success—a conflict that plays out in their relationship. While Mia has a traditional view of her path as an actress—with stardom and success as her goals—Sebastian favors purity, hoping to keep the tradition of jazz music alive.

This duality comes to a head when Mia struggles to find an audience for her one-woman show while Sebastian sells out and joins the popular touring R&B band of an old friend (John Legend, essentially playing himself). Suddenly, Sebastian has fame and no virtue while Mia has purity but no audience. Their relationship struggles for it and, unfortunately, falls apart.

By the film’s end, they both get what they want, but not each other. Sebastian finally opens his own jazz club while Mia becomes a jet-setting movie star, but long after they have separated. In a gorgeous and bittersweet epilogue—specifically reminiscent of the similar number that ends Gershwin’s An American in Paris—we are given a final glimpse of what their life could have been had everything gone perfectly.

As its title indicates, La La Land is a movie about a city as much as it is a love story. Our opening shot is a Los Angeles traffic jam that soon spins itself into a synchronized dance number: an ode to chasing the dream of fame while stuck in a neverending sense of boredom.

While one can be assured many Americans still flock to Los Angeles (or New York or Chicago or Austin or San Francisco) in hopes of making it big in any number of ways, the dream of becoming “famous” is within reach for more Americans than it has ever been before.

To be sure, such major urban arteries are very much the center of the entertainment and publishing industries. But any singer, musician, actress, comedian, or creative of any type can achieve worldwide acclaim, even amassing armies of loyal fans, whether in Boise, Biloxi, or Boulder City.

Charts and box offices today are stocked with artists who were either plucked from obscurity or found viral fame long before becoming institutions unto themselves. Troye Sivan, Justin Bieber, Tyler Oakley, and Carly Rae Jepsen were all “internet famous” before reaching bigger stages. Katy Perry was discovered by her label on YouTube, and Adele was found on MySpace. Rachel Bloom—creator and star of Crazy Ex-Girlfriend—was first noticed after she posted a music video for her own song “I Want io F**k Ray Bradbury.”

Facebook, Instagram, Snapchat, and Twitter have made popularity as big a part of the average adult’s life as it typically has been for teenagers. We are all, any time we post online, content creators. We are generating photos, moments, stories, jokes, opinions, and other tools we hope will craft the way people perceive us. For the entirety of the 20th century, such attention-getting was solely the purview of the news and entertainment industry; it is now the focal point of any social scene.

But when personality becomes media, it can strip away any sense of authenticity with it. We all craft our personalities to the opinions of others, but social media gives us unique tools and fertile ground to do so. We have an unprecedented ability to portray ourselves as who we wish to be or who we want others to perceive, often in the name of pleasing our audience.

When personality becomes media, it can strip away any sense of authenticity with it.

And that’s why La La Land resonates so strongly. The conflict between Mia and Sebastian is about the distinction between our best aspirations and our worst realities. We can, as Mia does, glorify attention and then chase it, only to (as Sebastian does) find the entire business a chore. We can take Sebastian’s path, toiling in solitude for the sake of our own conscience, only to be warmed by little more than our own heartbreak when we fail to find any audience for it, like Mia at her not-so-big debut.

Another upcoming, Oscar-worthy feature takes a similar viewpoint. In Paterson, Adam Driver plays a bus driver named Paterson who lives in Paterson, New Jersey. Paterson lives a quiet, unremarkable life yet fills a notebook with gorgeous, beautiful poetry—much like his girlfriend, who wants nothing more than to be a country music star. When his dog devours the notebook—destroying the fruit of his only creative outlet—Driver’s character finds himself existentially lost: What was all that work for if no one will ever read it?

These are films made for the slogging middle age of the digital era. After the novelty of viral fame has faded, we all know many of the people who become stars online end up like lottery winners, tragically overwhelmed by their sheer luck. We can all dream of the big break like the characters in La La Land, but we must also become content with our deceptively peaceful lives, like those in Paterson.

La La Land is a titanic achievement, awe-inspiring in its details and its wider mission. The film’s nostalgia for a bygone era is neither ironic nor gimmicky, and it offers many of the serene moments that have been missing from theaters for decades. (Watch your fellow theatergoers be enraptured as they are asked to watch three solid minutes of nothing but a tap number.) The film’s real value, however, is not in how it evokes the past, but in how it reminds us of the struggle of the present.