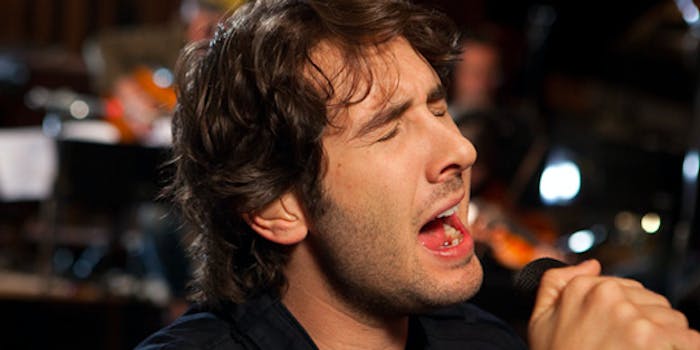 Josh Groban sold millions of records with his rich, golden tenor, and he’ll earn thousands of retweets with his scathing political satire.

The “You Raise Me Up” singer quoted a tweet from Reuters on Monday that said the United States’ global image has plummeted under President Trump’s leadership, adding the caption: “Survey says….<studio audience chants> NOT GREAT!!”

Perhaps unsurprisingly, this made some of his followers very, very angry.

“I’m a Trump supporter! Very disappointed to read this,” one user replied. “I was a huge fan. Guess you’re just part of Hollywood elite now. Sad!”

I'm a Trump supporter! Very disappointed to read this. I was a huge fan. Guess you're just part of Hollywood elite now. Sad!

Groban took the criticism in stride, tweeting a picture that he must have presumed would quell @RazorbackFan’s fury.

Is it more salt of the earth you're looking for? pic.twitter.com/r60DjYHmKW

The disgruntled ex-fan fired back a few volleys, arguing for a while with Groban’s followers but getting no response from the singer himself. Another user tried (and failed) to get #BoycottJoshGroban trending, though Groban quickly eviscerated his adversary.

That could have—and should have—been the end of it. But then Sean Hannity chimed in.

Thankfully, the multi-platinum singer kept his cool and tactfully shut down Hannity.

He even schooled the Fox News host on the difference between journalists and entertainers.

And sometimes @FoxNews. Chris Wallace, Bret Baier, Shep Smith. News folks. Not entertainers like you and me.

The moral of this story: Don’t mess with Josh Groban. He will raise you up, but not so you can stand on mountains—simply so he can send you crashing back down to earth with his 140-character barbs.