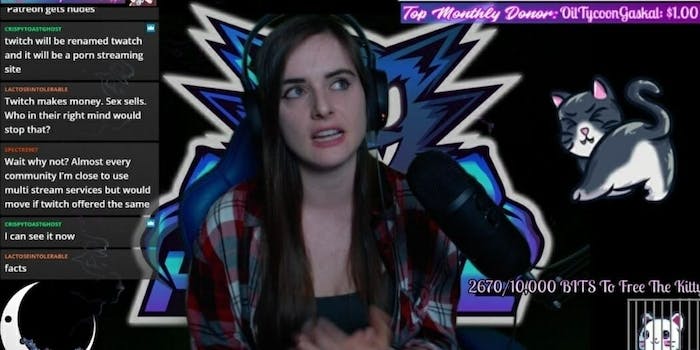 ‘I feel like Twitch is just one big f*cking circle jerk.’

The controversy over so-called Twitch “thots” was reinvigorated Monday by a viral clip from a streamer who said it was wrong that the platform continues to give them light punishments for breaking its Terms of Service (TOS).

Twitch’s Hiiiilee, who has about 1,500 followers, went on a rant about “thots”—the derogatory term given to women for using their bodies and sex appeal to create content and build their follower base. In her monologue, which has been viewed more than 70,000 times, she said Twitch refuses to give meaningful punishment for “thots,” while others who were mistakenly thought to have said the N-word are given much longer bans.

“Now that Twitch thots are a big deal … Twitch is doing the bare minimum to slap them on the wrist and say ‘Oh no, you shouldn’t do that.’ People are getting banned for mistakingly thinking they said the N-word on stream when they said ‘idiots’ but bitches are here showing their feet and using their tits as puppets and they’re not getting banned?” she said. “Come on. What’s going on, Twitch? Who do you have working for you? I feel like they literally have a circle jerk in their staff room every morning. I feel like Twitch is just one big fucking circle jerk.”

Hiiiilee continued by saying it’s been a problem for Twitch since the beginning of the platform. But since she said there was such an uneven implementation of punishment for those who broke TOS in the early days of the platform, the so-called “thots” could get away with skirting the rules.

Despite the recent bans on streamers like SweetSaltyPeach, BadBunny, and Arilove for showing nudity (accidental or otherwise) or sexually suggestive content, Hiiiilee said those who have been on Twitch for a substantial length of time aren’t being punished like they should.

“It might not have been the vision Twitch had when they launched their platform—that it would be run by these thotties that are twerking for [subscriptions] and getting subs by licking their microphones doing ASMR,” Hiiiilee said. “That might not have been the vision of Twitch initially but they are sure as hell are not doing anything to stop it or revamp it because they are making money.

“They have strayed so far from the initial platform they tried to create. They don’t give a single fuck because they are making money. Why would they stop these thotties when they make so much money [from] them?”