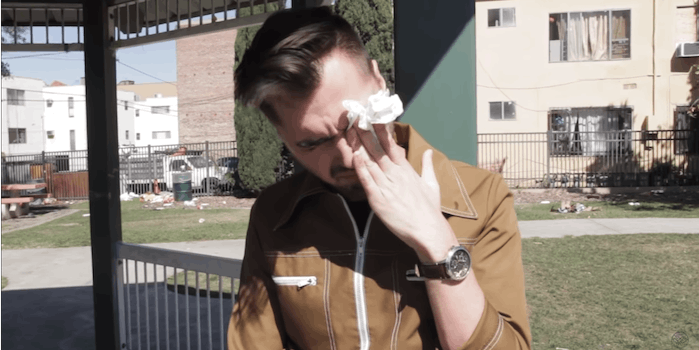 YouTube is a melting pot of user-uploaded content, and it produces videos that are about 90 percent garbage and 10 percent good. Add two more to the latter category, with this great exchange of videos from two YouTube veterans.

It all started back in 2017, when Elliott Morgan—of the Valleyfolk, but previously of widely popular YouTube channel SourceFed—needed some cash. He did some pilots, one of which was for a TLC show called I Catfished My Kid, and moved on to bigger and better things. That is, until Ethan and Hila Klein, the minds behind H3H3 Productions, got a hold of the footage.

Ethan made this scathing video, roasting Morgan for everything from his clothes to his decision to meet his “victim” at a gazebo in the series. Seriously, he hates that gazebo.

H3H3’s video was uploaded to YouTube on Oct. 11, and it didn’t take long for it to make its way to Morgan and his friends at the Valleyfolk. Their response, which they uploaded five days later, was priceless. It’s a meta, seriously funny reaction video about reacting to getting roasted online, and the thought process behind responding publicly. Things get darkly funny.

Morgan even made the gazebo a staple of the video. His willingness to poke fun at his questionable professional decisions is hilarious and relatable, and people immediately took notice when the clip went live on Tuesday. The response video shot to the top of Reddit‘s r/videos on Thursday and has more than 200,000 views on YouTube. It is a collection of sharp comedic decisions: From his fellow SourceFed founders’ scathing jests to the It’s Always Sunny in Philadelphia homage. Joe Bereta, Lee Newton, and Steve Zaragoza use their varying comedic styles to tear apart Morgan’s performance, and it all ends with an incredibly simple song that will nonetheless be stuck in your head for weeks.

“I am an artist, and it’s nice to see so much of my work finally recognized for its subversive qualities,” Morgan told the Daily Dot.
“But in all seriousness: I wouldn’t have the job I have now if I hadn’t taken some embarrassing jobs to survive, so if the life I have currently took me catfishing some kids, well, don’t look in my van.”

Morgan also commented on his 2017 career decisions in a tweet, saying that most of his work was “total embarrassing garbage.” He noted that his rule for 2018 “is to do nothing unless I have a say in the final product.”

I did multiple pilots and even appeared in a Kardashian show in 2017. Very proud of one project. The rest is total embarrassing garbage. Here’s the single good thing (also the one I coincidentally had creative control over). https://t.co/WboPhGj1C2

Just landed and saw this. Really cool and even moreso than that also v weird. I feel like I’ve been making jokes with my friends in a closet this past year and someone just turned on the lights and it turns out we’ve been in a gazebo the whole time. https://t.co/YuOGOi2cGZ

If Morgan’s minor missteps always lead to this level of comedy content, then embarrass away, fellow YouTubers.