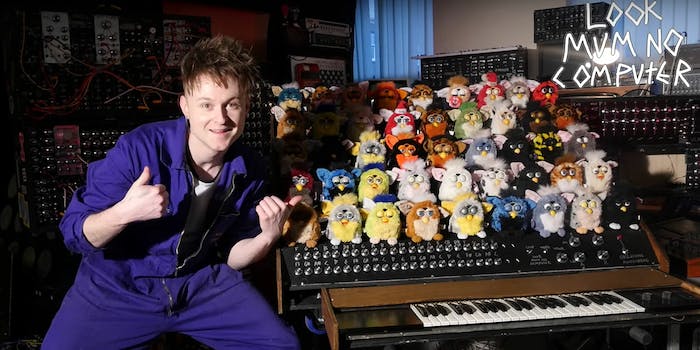 It's the organ from hell.

Almost exactly 20 years ago, Tiger Electronics changed the world with its release of the Furby—a toy owl-meets-hamster creature that became the first successfully marketed household robot after 40 million of them sold in its first three years.

Kind of like everything else that was a hit in the ‘90s (overalls, scrunchies, JNCOs) young millennials outgrew Furbies and collectively realized how terrifying the little dudes actually were. One YouTuber, however, has decided it’s time Furbies made a comeback and he did it in a terrifying way.

Musician and inventor Sam Battle of YouTube channel Look Mum No Computer salvaged over 44 Furbies and attached them to an organ.

“For the past few year, I’ve been dreaming up a machine that will finally give these tragically discarded little dreamboats a use,” Battle says in a YouTube video. “Finally after trawling through eBay and rummaging through charity shops up and down the land, and a heck of a lot of soldering, I present to you the Furby organ.”

Once Battle turns the organ on, 88 Furby eyes open and 44 beaks begin to squawk their iconic robotic Furbish language. As Battle plays a song on the keyboard, the creatures begin to “sing” along.