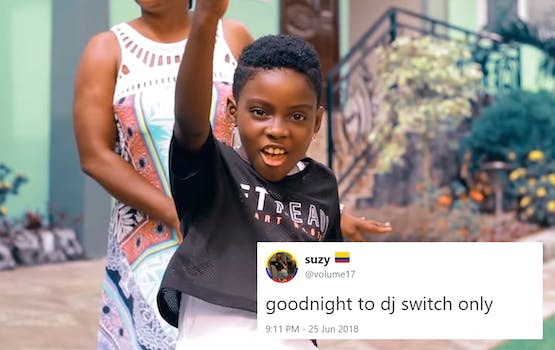 Twitter is obsessed with DJ Switch, a 10-year-old girl from Ghana

From the dark storm of news about immigration, nuclear weapons, and President Donald Trump’s travel ban, DJ Switch emerges like a ray of light.

Erica Tandoh, a 10-year-old girl from Ghana who goes by the name DJ Switch, captured the hearts of Twitter users everywhere after BBC News Africa tweeted its profile of the young superstar.

The video follows her through short snippets of her day at school and during DJ events, where stands atop a crate in order to reach her sound mixing equipment. “I picked the name DJ Switch because I switch up people’s happiness,” Tandoh says.

Perhaps the most wholesome moment of the video comes when she says she hopes to be a gynecologist because she “want[s] to help women.” (Cue loud “awww” from the viewers.)

I love this video so so much. Best piece ever.
DJ Switch is my idol. Wow. https://t.co/O7e9SdDhHS

DJ Switch is my new heroine!!!! Forget Wonder Woman. She’s got all the power!!!!! https://t.co/ZqmlmXaxOE

In addition to being the youngest ever winner at Ghana’s annual DJ Awards, Tandoh boasts a number of musical talents. The budding DJ is being celebrated by Twitter users as a symbol of Black excellence and even received the stamp of approval from actress Gabrielle Union.

Some users drew comparisons between Tandoh and Mason Ramsey, the 11-year-old boy who became famous after a video of him yodeling in a Walmart went viral.

i 100000% didn’t give a damn about the walmart kid, but DJ SWITCH CAN TAKE ALL MY COINS. ACTUAL TALENT YALL. WASSUP WIDDIT!?! SPREAD THIS https://t.co/PZm3RZ3fXq

Hopefully, it’s only a matter of time before DJ Switch is swapping jokes with Ellen DeGeneres and dropping beats at Coachella.