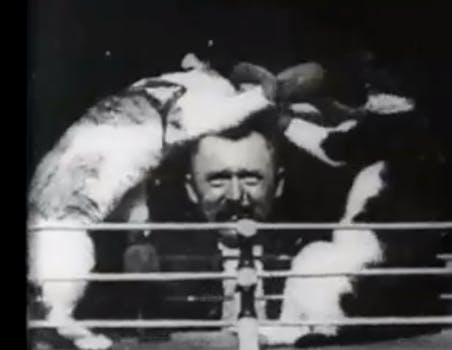 A video of two boxing cats was filmed in Edison's studio in 1894, making it the oldest cat footage on YouTube.

YouTube was basically made so that we could sit at home and watch other people’s cats act like idiots, so it stands to reason that the site now facilitates what’s considered by many to be the first cat video to ever show up on the silver screen: a 19th century clip cut on an Edison Kinetoscope that features two cats gloved up and punching each other in the face.

No lie, the first cat video ever recorded looked more like The Thrilla in Manilla than anything that happened to show up on the Friskies. Both of these kitties go at it with the fury of a thousand felines for about 30 seconds, and though there’s no official ruling, we have to consider that ended in a draw.

According to the Library of Congress, which sells a copy of the “The Boxing Cats” for $10, the cat clip in question was filmed some time in July 1894 by famed inventor Thomas Edison at his Black Maria Studio in West Orange, New Jersey.

Both cats herein featured belong to Professor Henry Welton, a onetime military colonel who served during the Second Mexican War. Welton is not the guy featured in Edison’s video, but he sure did have a lot to be proud of. Those cats had the kind of heart you just can’t teach.

Nine lives and ten rounds. As Don King is known to say, only in America!

Photo via Library of Congress/YouTube