It's burning up in here.

The group released its new track, “Fire,” last week, and ever since, it’s been exactly that. BTS—which is changing K-pop for the better— announced Thursday through its official Twitter feed that the band has been awarded its own Twitter emoji for consistently trending on the site as one of K-pop’s strongest presences. In 2015, BTS made the list for Twitter’s top 10 trending topics.

And now it has its own emoji. 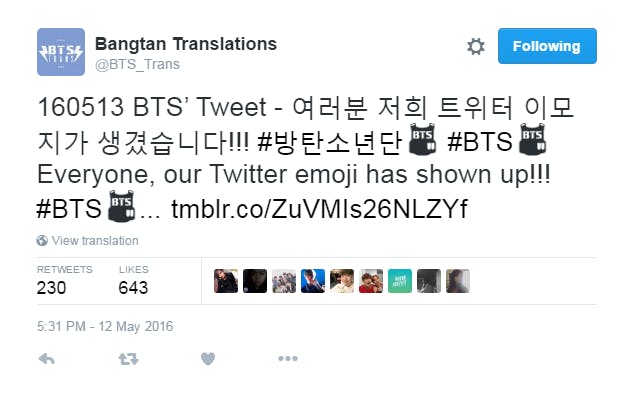 The emoji itself is an icon of the group’s signature bulletproof vest, concurrent with its full name, Bulletproof Boyscouts. Twitter populates the emoji automatically when users use the hashtags #BTS or #?????, the group’s name in Korean.

The emoji will be used to track BTS’ most active fans between now and June 22. BTS will use the data to determine the top five most engaged countries by the end of the Twitter campaign and record a special video message to each. According to Billboard, South Korea, Japan, the Philippines, the United States, and Indonesia are currently in the lead, but the competition is open globally.

BTS is also spreading its flames on the charts, breaking the U.S. Billboard 200 Chart for the first time at No. 107. To put it into perspective, world famous British band Muse first broke the Billboard 200 at the same position with its 2003 album Absolution, which included two of the band’s most popular songs, “Time is Running Out” and “Hysteria.”

Meanwhile in Korea, the band just scored its second win—making it two for two—on Music Bank, one of Korea’s many performance shows. Idols perform on these shows to promote their music and receive awards based on fan votes. BTS took its first win earlier this week on M!Countdown. The group took home its first award on The Show last May with the track “I Need U.”

BTS will be on tour in Asia in June, and it plans to come to the U.S. from June 24-25 for the annual Korean music and culture convention, KCON, in New York. BTS also will attend KCON LA in Los Angeles from July 29-31.