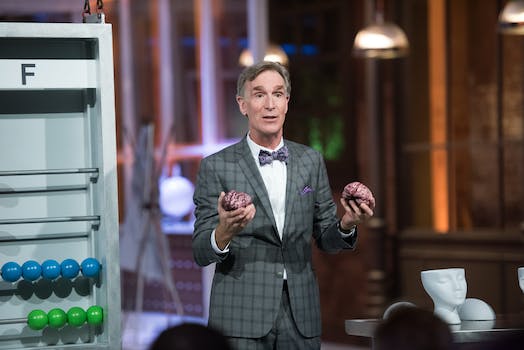 They really do not like that Nye's views have evolved.

Bill Nye returned to screens last month with the debut of Netflix’s Bill Nye Saves the World, and although it’s received mixed to positive reviews it hasn’t been without controversy.

Much of the hubbub surrounds the episode “The Sexual Spectrum,” in which Nye states, “Gender is like sex, it’s on a spectrum.”

“We used to think of gender and sex as synonymous, but these days we use the two words differently,” Nye said. “Sex is biological. Gender is how you identify yourself and your experience.”

He’s addressing the nuances in and differences between gender and sexuality, and how some people align with the same sex and gender (like himself) while others might identify with one sex and another gender, or both, or neither of them. Nye acknowledged his privilege before starting his discussion and managed to explain it to those who might not have known or thought about those nuances before. Many viewers praised him for acknowledging and embracing that gender and sexuality are on a spectrum.

First, memes quickly spread online falsely depicting Nye being bribed to change his stance from “gender is determined by your chromosomes.” (He also never said the quote depicted in the meme.) They had problems with “My Sex Junk,” the song performed by Rachel Bloom in the episode. Then he was attacked for a cartoon that appears in the episode explaining how gay conversion therapy doesn’t work.

Now, critics are citing the alleged removal of a clip from his old show, Bill Nye the Science Guy, discussing gender binary as proof of censorship.

The episode in question is from the fourth season of Bill Nye the Science Guy and is titled “Probability.” One of Nye’s young assistants is shown using refrigerator magnets and a coin to demonstrate the possibility of your gender being determined by the X or Y chromosome. Versions of the old episode can be found on YouTube (starting around 7:35) and Daily Motion (starting around 9:06).

“You’re either X and X. Girl. Or X and Y. Boy,” the assistant said. “The chance of becoming either a boy or a girl is always one in two.”

“Probability” is included in Netflix’s collection of old Bill Nye the Science Guy episodes, so in the midst of the controversy surrounding Nye’s comments on gender and sexuality, some noticed that the clip isn’t part of that episode. (The Daily Dot has reached out to Netflix for comment.)

It’s unclear what might be behind the exclusion of the clip, or if it occurred prior to Bill Nye Saves the World’s debut, or even prior to it being added to Netflix. But it hasn’t stopped people from accusing Nye and Netflix of censoring the old clip to serve an agenda because it contradicted with Nye’s statement that gender is on a spectrum. Some believe Netflix edited it out to appease the LGBTQ community, while others suggested it’s laughable that Nye changing his views on gender is propaganda.

Some took issue not with Nye’s more nuanced views on gender but rather the fact that the now-factually inaccurate clip was removed in the first place.

“I don’t see the point in removing the section from the episode,” one person wrote. “I’m not going to get into how many genders there are. But even if this was wrong, just accept it. You don’t see people cutting out huge sections of scientific research because it doesn’t fit with certain narratives, or even if the data is found to be incorrect or new data is found which disproves the old data.”

In “The Sexual Spectrum,” Nye acknowledged that the science—and his views—on gender and sexuality have changed. There are more than two combinations to determine sex (even on a chromosomal level), which makes the simplified segment on the subject to be no longer accurate. Toward the end of the episode, Nye explained how many combinations of gender, sex, attraction, and expression there are—and how our culture allows people to express it more easily.