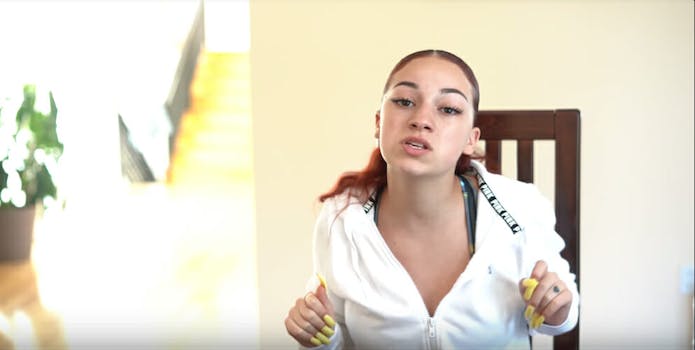 But don't go labeling her just yet.

Danielle Bregoli, the 15-year-old who turned her “cash me ousside” meme fame into a rap career under the name Bhad Bhabie, revealed on her new mixtape that at one point she lived with a girlfriend.

Bregoli took on the Bhad Bhabie alias after her episode of Dr. Phil blew up and turned her into an online sensation. Her single “Hi Bich” went gold after she signed with Atlantic Records, and she just released her first album, 15, on Friday, two years after her fateful visit to the daytime talk show.

The outro to the album, titled “Bhad Bhabie Story,” runs over six minutes as she explains how she came into the public sphere. The internet is already privy to much of Bregoli’s story, but one line about an apparent ex-girlfriend stuck out.

“That day I met this girl Gabby / Who I then started dating or talking to for a couple months (I don’t know why… I really don’t know why),” Bregoli raps. “And I was living with her in her trailer and it was crazy like, every time I’d go outside, all the neighborhood kids were surrounding her house.”

Bregoli’s past relationship isn’t new, as she previously shared photos and videos of her with Gabby on social media. And while members of the LGBTQ community might be eager to welcome the teen, she’s certainly not embracing a label. In a 2017 Facebook Live video, which was later reposted to YouTube, Bregoli told fans that she wasn’t with Gabby because of her gender.

“Let’s get something straight,” Bregoli says in the video, “I am with Gabby because I love that girl. Not because—I’d be with her if she was a guy, a fucking girl, a fish, a fucking piece of bread. I don’t give a fuck. A piñata … I don’t know if that means I like girls.”

People on Twitter also speculated (well, joked) about Bregoli’s gender identity earlier this month after she said in an interview with Genius that she doesn’t think she’s “a girl.” But the comment seemed more about distancing herself from other teens than any declaration that she’s nonbinary.

“I’m not like these bitches,” Bregoli says. “I’m really not. I’m not a fucking hater.”

Bregoli seems reluctant to fit herself into any category, sexuality or otherwise. And while her audience might be trying to figure out who she is, given that she’s only 15, she’s probably still trying to figure that out, too.