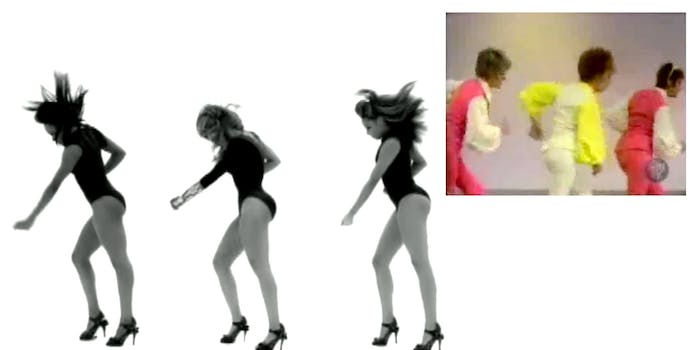 Put down the pitchforks, folks. It's a simple explanation.

The internet loves a good witch hunt, but maybe it should do a little investigating before coming after Beyoncé, of all people, with pitchforks and torches ablaze.

Last week, Twitter bore witness to a video and song mashup of a clip for Future‘s “Mask Off,” alleging that the three women in the video were “backup dancers.” Racking up more than 20,000 likes, it’s understandable to see why the video became so popular—the three women dance on beat to the tune, shaking their hips and running in formation like true jazz artists.

However, among the slew of people tweeting back skull emoji in reply to the clip, a consistent theme appeared: Many viewers thought the video clip, which clearly originated from the ’70s (in fashion and in picture quality), looked exactly like the video for Beyoncé’s “Single Ladies.”

Sooo I'm pretty sure we can put this to "Beyoncé – Single Ladies" as well…… https://t.co/U4bfSw7Mft

“Beyoncé stole their moves,” isn’t just an offensive accusation, but it’s straight up inaccurate. The video in question is a routine titled “Mexican Breakfast,” and it’s choreographed by famous Broadway director and choreographer Bob Fosse for the Ed Sullivan Show in 1969. The woman performing the routine center stage is actress and dancer Gwen Verdon, Fosse’s wife.

Here’s a clip of Verdon’s performance to the original song (you’ve got to log into Vimeo to watch it), and you can watch a side-by-side comparison of the two music videos below:

Beyoncé, however, never “stole” the choreography and has owned up to Bob Fosse’s work serving as the inspiration for her fancy “Single Ladies” footwork.

In 2008, shortly before the drop of her third album I Am… Sasha Fierce, Bey appeared on BET’s music video show 106 & Park and explained that a similar version of the Future mashup with “Mexican Breakfast” quite literally fueled the moves for her single’s music video.

“… I saw this on YouTube. It’s these three ladies, and one of them is Bob Fosse’s wife, who’s this choreographer, and they’re doing ‘Walk it Out.’ They put ‘Walk it Out’ to the music, it’s from like the ’60s, and it’s one take, and it’s black and white,’ Beyoncé explained. “And I thought, ‘Wow, how amazing would that be now, because videos have so many cuts and different takes, just to see a nonstop dance video, one take all the way through, very simple.'”

Even one of Beyoncé’s “fave” choreographers, Frank Gatson, told Cosmopolitan last year that he and choreographer JaQuel Knight based the performance on “Mexican Breakfast.”

“Me and Beyoncé saw it, and we thought, ‘Wouldn’t it be great to modernize this?'” he told the publication for an article on the 12 things Bey fans didn’t know about the “Single Ladies” music video.

In summation, yes, Beyoncé’s video is definitely a tribute to “Mexican Breakfast,” and no, there was no facetious “stealing” involved. And all these Beyhive conspirators had to do was execute a simple Google search.