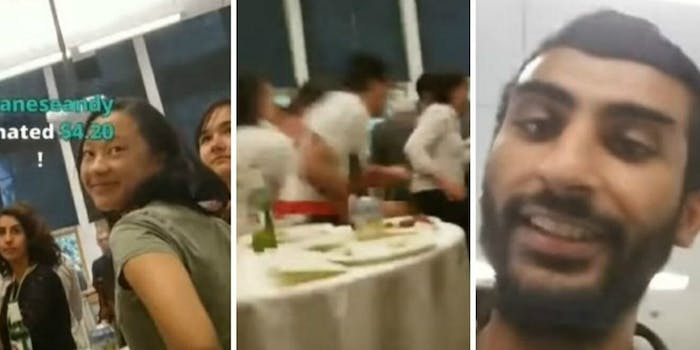 'I made a whole crowd f***ing run for their lives.'

A YouTuber who livestreams his everyday life has been arrested in Seattle after posting a video of college students frantically escaping from a building they believed was under a bomb threat.

Arab Andy, who has nearly 7,000 subscribers on his YouTube channel, allegedly made a false bomb threat at the University of Washington, and he streamed the immediate reaction and the aftermath. As the YouTuber suddenly found himself in an empty hallway, he repeated to himself, “Holy shit.” He later said, “Dude, you can not get a better reaction than that … That was not on purpose … I made a whole crowd fucking run for their lives. That is intense.”

According to the International Business Times, Arab Andy streamed the incident on YouTube and Twitch.

Arab Andy—who describes himself as an “IRL streamer willing to do anything for some good content”—interrupted a lecture, wrote the student newspaper, The Daily, before he moved to another part of campus where the alleged bomb threat was played over his phone’s speaker.

The audio, which apparently came from a fan in a text-to-speech message, said, “Attention, attention: C4 has been successfully activated. Bomb detonation countdown successfully started.” Then, a loud beeping sound could be heard, as students immediately ran for the exits.

The livestream continued as police eventually forced Andy to the ground at gunpoint and arrested him. Through it all, Arab Andy claims he did nothing wrong.

According to University of Washington police, he was arrested on charges of making a bomb threat.

“The investigation revealed this was a prank and there was no device on him or left in the room,” police said. “UWPD, in collaboration with Seattle fire and Seattle police, determined there was no ongoing danger.”

The video is no longer available on Arab Andy’s channel, but the mirror video above showed the panic that shot through the students.

“We were in a reception in our conference room … listening to our chair talk about our year’s worth of stuff … then this man, who was about 6-foot-1 comes in the doorway and says ‘I’m sorry I’m late,’ and I didn’t recognize him, so I say are you supposed the be here … then he didn’t really say anything but then he pushed a button that said, ‘Attention, attention, attention’ then there was a long gap and it said ‘C4 device activated, the countdown has begun,’” a male sociology faculty member told the student paper.

As Polygon explains, Arab Andy was receiving donations from his followers via text-to-speech messages, where a person can donate money and have their own personalized message play on the streamer’s phone speaker.

In a recent video, Arab Andy nearly got into an altercation with passengers on a bus after a text-to-speech message on his phone repeatedly said the N-word.

Update 12:33pm CT: The University of Washington police department told the Daily Dot it had no additional comment or information.