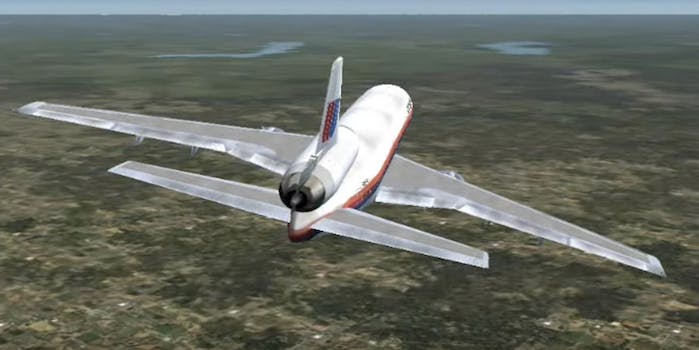 Everyone's got a hobby.

The beauty of the internet is how it reveals some truly unorthodox taste in our fellow human beings. I mean, you’re probably pretty normal and into Game of Thrones, dog Instagrams, and U.S. soccer—but then there’s someone like Allec Joshua Ibay, who passes the time by reenacting famous plane crashes in flight simulators.

That is quite possibly the most morbid hobby in the world. And let’s be clear: Ibay isn’t doing this out of an edgy fake-callousness. He wants you to take these videos seriously. In each clip, he provides a text commentary on all the mechanical (and sometimes human) errors that culminate in the crash, and he also includes a running transcript of the radio chatter between the plane and ground control.

There’s something vaguely disconcerting about actual human death filtered through the sterile, corduroy-shorts organization of your average flight sim, but I don’t think that’s intentional. Our guy Ibay is simply providing an interesting, historical, factual look at one of the great universal fears of modern living. It’s not exactly something you want to say on your Tinder profile (“pastimes include fitness, and reawakening the latent terrors of commercial fliers”), but I’m glad he does it. People like him are why the internet is a deeply fascinating place.

I’ll leave you with his video on a 1999 South Dakota Learjet crash, in which a depressurized cabin left everyone in the plane incapacitated. It meandered on autopilot for 1,500 miles before eventually plummeting into the desert. Sleep tight!