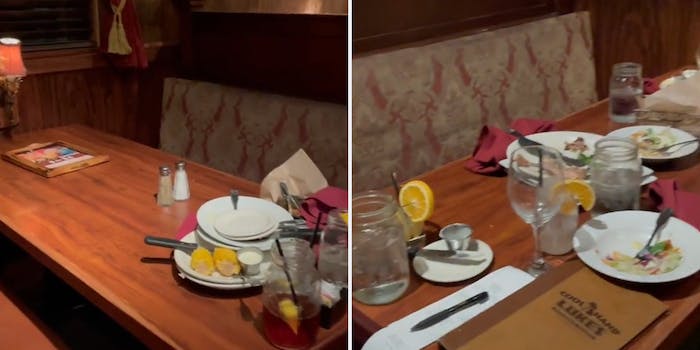 'It's funny cause the cleaner table also probably tipped better.'

Sally Loeza (@sallymander_) posted a video captioned: “Younger generation vs. older generation.” It has a left-to-right pan, first showing a tidy table with stacked plates and flatware and then a table with dinnerware scattered around it.

The video has been viewed over 630,000 times and liked over 86,000 times since being posted on Thursday.

Loeza commented: “I’m not the waitress. I was the customer to the left. Even though it’s not ‘our job’ it takes 5 seconds to pick up after yourself & requires 0 effort.”

The comments on the video varied. Some familiar with waiting tables, including current and former service workers, chimed in.

Like some commenters, one wrote, “I always stack the plates and gather it all together before leaving. It just seems more courteous.”

However, many former restaurant workers countered these seemingly well-meaning actions.

One person wrote: “Worked service 15 [years] and actually hated when customers did this, they always stacked them wrong. [I prefer] to do it myself.”

“As a busser, I kinda don’t like when people stack cause it ruins my flow and the way I do it. Best to just tidy it up instead,” said another.

Loeza pointed out via another commenter’s opinion that a more significant point was being made from her generational standpoint: “Guys, nobody said it was expected to do this lol they were just pointing out how younger ppl tend to be nicer to servers be they do kind things like this.”

The Daily Dot reached out to Loeza for further comment.