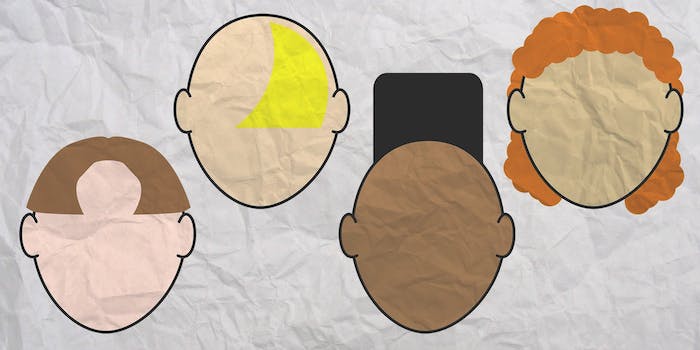 The worst ’90s haircuts ever

Some styles don't need to make a comeback.

That line could open about 50 percent of the articles on the internet and it’s a small wonder why: It was the last good decade before the whole world went to shit. The following decades have seen the unfortunate rise of neo-cons and neo-nazis, so who can blame us for being nostalgic for the era of Neopets?

Looking back at the hairstyles that defined the final years of the 20th Century, there were a lot of big swings stylistically and equally big misses. These haircuts may have been considered the height of cool at the time, but now they look as corny as reruns of Home Improvement.

On the other hand, style can be cyclical and what’s out can just as quickly be in again. Who knows? Maybe next year we’ll be seeing sidecuts and Mermaid-hair cast aside for Bowl Cuts and French Rolls.

Was the haircut famous because of Jennifer Aniston, or was Jennifer Aniston famous because of her hair? During the peak of Friends, Jen’s hair was as ubiquitous as the show. Every woman in Western civilization decided this was the style to emulate and, along with white t-shirts and boot-cut blue jeans, became the Must Get Look for ‘90s babes despite Aniston herself absolutely hating the Rachel.

For the Teen Beat crowd, Jonathan Taylor Thomas was the biggest heart-throb of the ‘90s and his iconic hair was a key part of his appeal, although he certainly wasn’t the only hunk to rock it; maybe some would prefer to see this style called The Ryder Strong. Whoever you preferred under the hair, the ‘do is defined by thick shiny bangs parted right down the middle — perfect to brush out of your eyes for added cuteness. This cut paired very well with ripped jeans and flannel shirts casually tied around the waist.

In the ‘90s this style was for only the coolest dudes like Will Smith and De La Soul, although it was originally popular as a Flat Top in the 1950s as a haircut for squares and guys like Johnny Unitas and Roger Maris; proof that style is quite cyclical in nature, after all. We’re already seeing a bit of a resurgence with this style as more influencers, such as NBA player Norris Cole, are bringing it back again.

It’s hard to say what drove people to the Rat Tail, a carryover style from the ‘80s that really hit it big in the ‘90s. Did someone see a rat one day and say “someone take me to a barber, fast!” and was that person insane? This regrettable style features one long strand of hair protruding from the back to mimic the backside of common vermin. Come to think of it, this style was generally worn by rat-faced guys, so it kind of worked out.

Every boy band in the ‘90s was legally required to have at least one member rock the frosted tips, or at least, that’s the way it seemed. Some boy bands like N’SYNC and 98 Degrees went above and beyond and made sure each member had their tips frosted. So it wasn’t long after that non-famous boys adopted the look to impress their female counterparts and then everybody looked stupid. For some reason, this hair was almost always paired with a puka shell necklace. Maybe the hair stylists gave them out free as a “buy one, get one” kind of deal.

How many young men bleached their hair blonde before 1999? Somewhere around… zero. But after Eminem cannonballed into the national consciousness with “My Name Is”, there was no better way to express your rage than mimicking Marshall Mathers’ unique style. Suddenly every pissed-off suburbanite was flipping off their parents and fucking off from their lawn mower duties to yell obscenities at TRL. That’s how chill the ‘90s were: The worst public enemy at the time was Carson Daly.

This style has been popular among African American women a few times, most recently in the mid-‘90s when Whitney Houston made it look good in Waiting to Exhale and The Preacher’s Wife. It’s a look that definitely requires a fair amount of time and effort and that may be why it fell to the wayside in the early 2000s and has yet to find a resurgence. Maybe it’s best left in the time capsule.

This achy-breaky style dominated the early ‘90s. Everyone from Billy Ray Cyrus, Mel Gibson, and even Superman adopted the “business in the front; party in the back” look for a time. After the pop singers, movie stars, and superheroes moved on, the style became more associated with beer-guzzling race car fans who often paired their long locks with mustaches for added, uh, hair.

This style rose to prominence among black men in the 1980s, thanks to Michael Jackson’s iconic Thriller album cover, and remained popular throughout the early ‘90s, thanks to N.W.A and Samuel L. Jackson’s wig in Pulp Fiction. If you were in the business of selling hair spray during this time, the Jheri Curl was a Godsend. In fact, the style was invented by a hair products business man named Jheri Redding, who invented the modern hair conditioner and many other hair products that have since become staples, including “pH balanced” shampoos and vitamin-centric hair products. At least someone benefitted from the trend, I guess?

Look through the old yearbook photos and you’d be hard-pressed to find a ‘90s suburban white boy who didn’t have this cut at some point in his adolescence. With the buzzed back and sides, the haircut is aptly named as it definitely appears like all it took to achieve this style was putting a bowl on top of a boy’s head and clipping the rest. Questions like “do you think this is a bad idea?” and “wait, why would anyone want their hair to be shaped like a mushroom?” simply weren’t asked in the ‘90s. It was a simpler time.