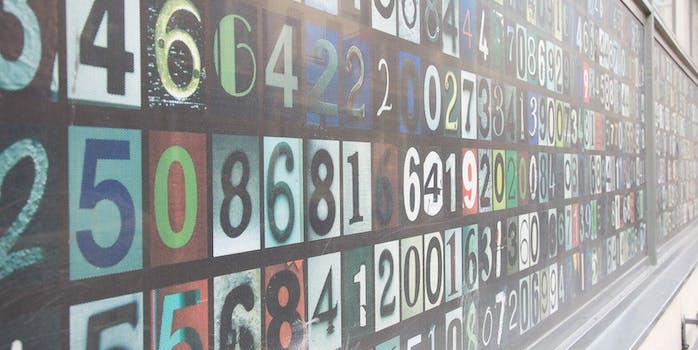 The latest news from the none-of-your-thoughts-are-original department comes from mathematics blogger Alex Bellos, who set out to determine the world’s favorite number.

Bellos apparently doesn’t have a favorite number himself, but as Nautilus writes, he began asking people about their favorite numbers a few years ago, and after setting up the Favourite Number website, more than 44,000 people voted for the numeral they liked best and explained why.

The third-most popular number is 8, because, as some of Bellos’s respondents wrote, “In Japan, eight is a lucky number, because the Japanese character for eight means ‘an opening to the future’” and “because of its symmetrical and round shape and because it has always given me a sense of friendliness and warmth (unlike, for example, 9 which looks ‘bossy’ or 6 which appears to me a bit submissive).”

No. 2 on the list is the No. 3, because “It’s curly, but not pretentious curly like eight” and because in Chinese, “3 means alive.”

But the world’s most favorite number is No. 7. As for why, Bello will explain that himself. It’s basically because of our desire to be outliers when it comes to arithmetical patterns.

As for why numbers ending in 0 or 5 are unpopular, Bellos said it’s because we use those numbers as approximations more than, say, 7 or 9.

“When we say 100, we don’t usually mean exactly 100, we mean around 100,” Bellos told Nautilus. “So 100 seems incredibly vague. Why would you have something as your favorite that is so vague? It seems that we like our numbers to be somewhat unique, which may be why prime numbers are popular. They aren’t divisible by any smaller numbers (aside from 1).”

Bellos’s research was revealed in 2014, but his conclusion has been bouncing all over the internet for the past few days. Because your favorite number is probably a topic that is endlessly fascinating.

Interestingly, the number 13 isn’t as unpopular as you might think. It ranks as the sixth-most popular favorite number (but decidedly lower among people who have been hacked to pieces by Jason Voorhees).