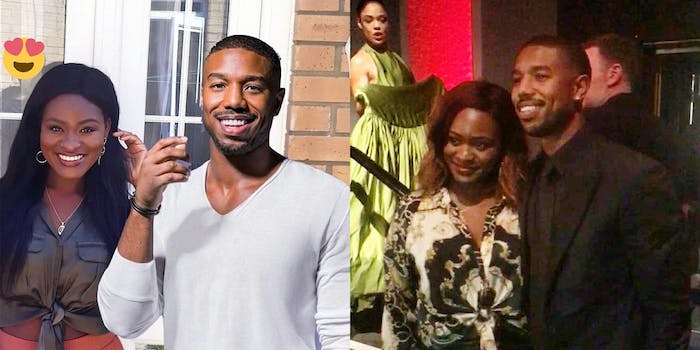 A woman met Michael B. Jordan after asking Twitter to help her find him

Last week, a woman named Bolu Babalola posted a Photoshopped picture of herself and actor Michael B. Jordan asking Twitter to help her find him. This came as a joke after Twitter helped two girls who met on a cruise ship 12 years ago reunite.

“I met this guy on holiday this summer-we had a such a great connection but I changed my number and we lost touch. Twitter do your thing,” she wrote in a tweet along with the photo.

Although the photo was clearly fake, she insisted it was real. “It’s upsetting me and my homegirls that people think this is photoshop. Please have some respect and stop being so cynical,” she wrote in a subsequent tweet. “Respect romance and stop trying to interrupt the course of true love. What’s understood don’t need to be explained.”

Apparently, you can manifest your destiny because last night, Babalola posted a real photo with none other than Michael B. Jordan. “Ms. Steal Your Man. Case closed,” she said in the caption.

Not only is this incredible, but an inspiration. She didn’t simply wait around for people to bring them together. She went after what she wanted and she actually got it. In this case, it was reuniting with her alleged summer fling who happens to be a famous actor. People on Twitter were also impressed.

if you dont believe in manifest destiny – i think you should now https://t.co/CTa0dUNscn

This year I graduated from my masters degree, finished my novel, got a column, started a key writing project, coined Oluwajack and wooed Michael B. Jordan pic.twitter.com/jqr2nRpcJy

If you want to meet your favorite celebrity, it seems all you have to do is post a Photoshopped picture of you two together on Twitter and let the chips fall where they may.