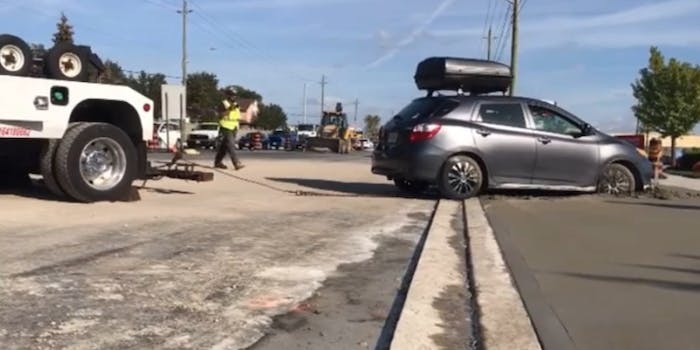 'Lady drove past our signs trying to get to the bank'

One of the most basic rules of the road is to proceed with extreme caution any time you see workers out doing their thing. Not only do you want to avoid hitting someone, but you also don’t want to get yourself and your vehicle mixed up in whatever work they’re doing to make the road a safer place.

Redditor u/derplin shared video over the weekend of a woman who didn’t pay attention to surrounding road work signs and drove right into a slab of wet concrete while in a rush to get to a nearby bank.

The video didn’t catch the act itself, but it did show the aftermath—a tow truck trying to drag the vehicle out of the slowly drying cement. Perhaps most hilarious is that the spinning wheels suggest the driver is trying to “help” by pressing on the gas even as nearby workers advise her to “worry about your brakes.”

The jokes for something like this were too obvious, and redditors never miss an opportunity for puns.

“This looks like it could be a sizeable insurance claim,” one user remarked. This prompted another to ask, “Does she have concrete evidence?”

“I don’t know but those tracks look like they’re written in stone,” a redditor quipped.

“She cemented her position,” one response said.

“It’s her own dumb asphalt,” a pun read.

While insurance may end up covering this driver’s carelessness, ending up with wet cement on your wheels is a surefire way to make yourself even later to wherever it is you’re trying to go. Caution signs and blockades are usually there for a reason!

The Daily Dot has reached out to u/derplin for further info via Reddit.