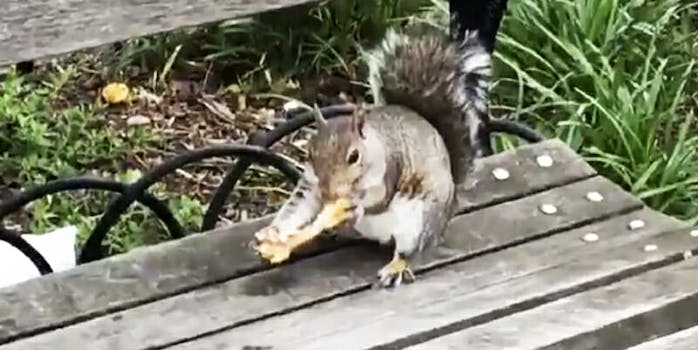 Three years ago, back in the quaint times of 2015–before “President Trump” was even a gleam in the GOP’s eye and before literal Nazis were marching the streets–the internet found a hero, and that hero was Pizza Rat. Comedian Matt Little happened to catch the now-infamous critter doing his best to make off with a slice of pizza bigger than its entire body down the subway stairs, which subsequently launched a thousand memes, copycats, and even sexy Halloween costumes.

The internet has since tried to recapture the lightning-in-a-bottle with other [food] + [urban pest] combinations such as Croissant Rat, Milkshake Squirrel, Shower Rat, and Bagel Pigeon, among others–but has never managed to eclipse Pizza Rat’s notoriety.

So today, for your consideration, we have the latest contender for viral rodent fame. Ladies and gentlemen, we give you: Wing rat.

Wing squirrel is the new pizza rat. Pls RT to help me pay for my children’s education. pic.twitter.com/iJkvxlpysP

Wing rat was spotted by Daily Show producer Jocelyn Conn, who joked, “Wing squirrel is the new pizza rat. Pls RT to help me pay for my children’s education.”

As her tweet began to go viral, others joined in on the fun, and one person already even had a name for the phenomenon.

We call that “squicken,” named for a squirrel eating a chicken taco from Taco Bell at NDSU in Fargo during the 90s.

Valentines Park Ilford 2002 I gave an Essex Grey a rice cake , it shot up the tree , took a bite and spat it out , dropped it and I'm convinced swore at me

oh great.. now they know what meat is like.. we're ALL in trouble now!!

The whole thing gives a much more chilling perspective to this clip from the season three episode of Rick and Morty, “Morty’s Mind Blowers,” to say the least.