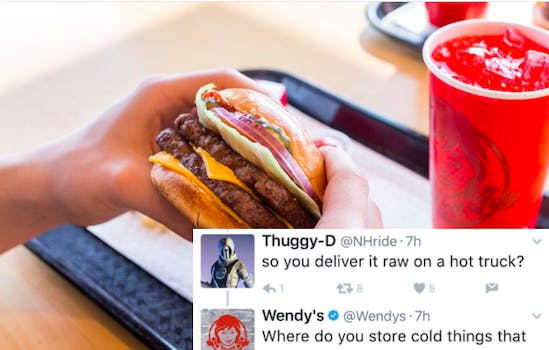 Meet the woman behind that viral Wendy’s Twitter burn

Editor’s Note: One year ago yesterday, Wendy’s Twitter account delivered one of the internet’s great burns. In honor of it, they decided to declare it a national holiday.

One year ago we roasted someone so badly they deleted their account.

Join us here Thursday, January 4th as we celebrate #NationalRoastDay

Amy Brown, the genius behind the joke, but who no longer works with Wendy’s, is using the occasion to highlight a missing menu item.

“Bring back spicy chicken nuggets,” she told the Daily Dot.

There’s no harder job on the internet than being a social media manager on Twitter. If you try too hard, you end up with an embarrassing brand #fail, latching onto the wrong meme or hashtag at the wrong moment. But when you get it right, when you’re just edgy or snarky enough, it’s a beautiful thing to behold.

Wendy’s experienced both extremes this week. The fast food brand had the best Twitter burn in recent memory on Jan. 2, when a Twitter troll named Thuggy-D pressed the company on its “always fresh, never frozen” slogan.

@NHride You don’t have to bring them into this just because you forgot refrigerators existed for a second there.

The exchange went so viral that the troll briefly deleted his account, and Anderson Cooper did a dramatic reenactment of the tweets on CNN.

.@andersoncooper gets to the meat of Wendy’s Twitter beef in #TheRidicuList https://t.co/KqvOax7JAH

But two days later, however, the account ended up deleting a controversial tweet that featured Pepe the Frog, a once-innocuous meme that has regrettably been co-opted by the alt-right and is now considered by the Anti-Defamation League to be a hate symbol, despite the cartoon creator’s best intentions. 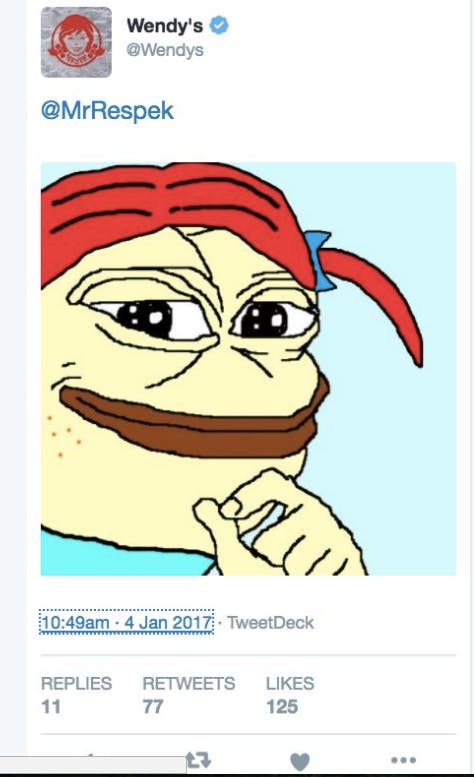 “A community manager, unaware of the recent evolution of the Pepe meme’s meaning, tweeted fan art featuring the frog in response to a request for a meme,” a spokesperson told the Daily Dot.

We reached out to the woman behind the Thuggy-D tweet, Amy Brown, to learn more about the highs and lows of managing Wendy’s social accounts, a position she’s held for over four years, dishing out owns about as often as each individual franchise sells a Frosty.

Just look at some of her handiwork.

While working in copywriting years ago, Brown applied for the Wendy’s opening on a lark. “The reason I hired Amy is because she has a killer Twitter presence herself,” said Brandon Rhoten, who’s now Wendy’s now vice president of advertising. “She applied, but got the job after I stalked her on social for a few days.”

In her time there, she’s given tremendous latitude to have fun online, cultivating an aura of what the brand calls “challenger with charm. We’ll roast you, but with a wink. It’s all in good fun!”

As for the response to the Pepe tweet, Rhoten says it happens when working in the fast-paced world of social media.

“It’s not great when something goes sideways, but we saw the mistake, deleted and apologized. Gotta own the goofs along with the wins.”

What follows is a conversation with Brown about her brilliant burn.

How did you notice the particular tweet from @NHride and why did you respond to it?

We came across Thuggy-D’s comment through our regular monitoring of social channels. We know that even when we talk about the “fresh never frozen” beef message that a lot of consumers still just, frankly, don’t believe us. We’ve been pushing back on them a little more in the past few months, just trying to hammer home the message that it’s a fact.

When did you realize he’d set you up to make a killer joke?

I mean, immediately? When you read “So you deliver it raw on a hot truck?” it’s kind of like…come on, man, of course we don’t. But also, you’d be surprised how often we have this conversation! In Thuggy-D’s defense, he is far from the first person to ask us how the beef stays cold if it’s not frozen.

Did you have any idea at the time it would go viral?

No idea! Like I said, we actually have conversations like this all the time. But it started picking up traction almost immediately, because it was the top comment exchange when you clicked to expand our promoted tweet. Some of our social media content does get news coverage from time to time (usually a few times a year), but never to the point where our tweets are being reenacted by Anderson Cooper.

What has been the reaction from inside the company to the coverage?

Did you get any thanks from McDonald’s for the deflection?

What were some of your favorite reactions?

My mom sent me an email that was just a screenshot of a Google News search for “Wendy’s.” We also had a girl tweet us this picture, which I absolutely love.

Pretty sure @Wendys should sponsor me for this😴🎉 pic.twitter.com/FFJZnLrAPZ

Have you heard back from Thuggy-D at all?

Yes, actually! I’m pleased to inform you that this story has a happy ending. He tweeted us last night

Is there anything else you want to say to him?

I am so sorry about your Twitter mentions over the past few days, they have probably been a nightmare.

I know you guys experienced a wonderful high, then an almost immediate backlash. Is it frustrating to know no matter what your good intentions are, people will lash out?

It’s definitely never boring, and no two days are the same. The downside [to it all]: trolls, obviously. I would also love to be able to just turn the internet off for a day or two and really unplug.

This interview has been lightly edited for clarity.

Update 11:00am CT, March 7: Brown announced on Twitter that she would be leaving the company at the end of the month.

She worked with the social media team at Wendy’s for over four years. Brown declined to comment on her departure from the chain.