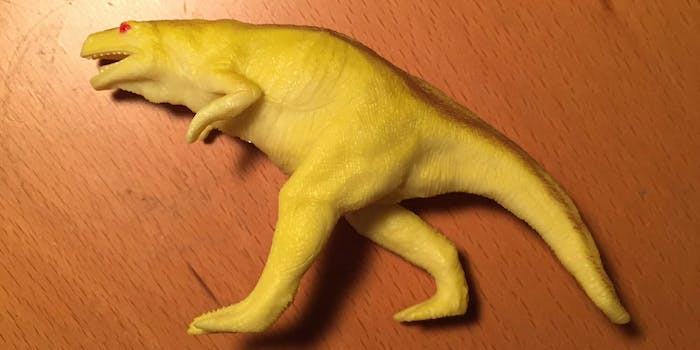 What does this toy ‘dinosaur’ look like to you?

'Looks like a banana wished to be real, but made the wish on a monkey’s paw.'

Author, illustrator, and BoJack Horseman writer Jonny Sun is in a bit of a conundrum. He won an “extremely strangely proportioned” toy dinosaur (or “leggy boi,” if you will) over at a bowling alley, and he needs Twitter to help roast his new son.

It’s understandable. The toy is shaped a bit like a chicken nugget and its arms are ridiculously tiny compared to its gargantuan, beefy legs. He needs to be shamed.

“I love him,” Sun tweeted. “My son looks like a man in a dinosaur costume.”

please roast this extremely strangely proportioned leggy boi i won at the bowling alley, i love him pic.twitter.com/FxD8TMCpmB

my son looks like a human-dinosaur centaur but in rEVERSE

Twitter quickly came to Sun’s aid and began dunking on the boi. For one, everyone has questions about why he’s so thicc.

Others users took one look and thought “me irl.”

when the jumpsuit is cute but the sleeves are too small

Me at 2 am on the way to the kitchen to eat shredded cheese straight out of the bag https://t.co/2dGdhvlWhQ

Looks like a banana wished to be real, but made the wish on a monkey’s paw

this is how substitute teachers come up to u asking if “ur teacher lets u do that” https://t.co/rpKUB2ZeOK

Like Ted Cruz unzipped his skin to get some air

Of course, a few folks defended the dinosaur and his looks. He has feelings too, y’know.

As for Sun? He’s aware that his leggy boi is going viral, and if his tweets are any indicator, his heart goes out to him.

oh NO MY POOR SON https://t.co/rkeiQDD6jc

MY SON IS LEG BUFF ONLY

oh no ur right i love my leggy son!!!

Leggy boi, we salute you. Even if you look incredibly uncomfortable.

Looks like a banana wished to be real, but made the wish on a monkey’s paw