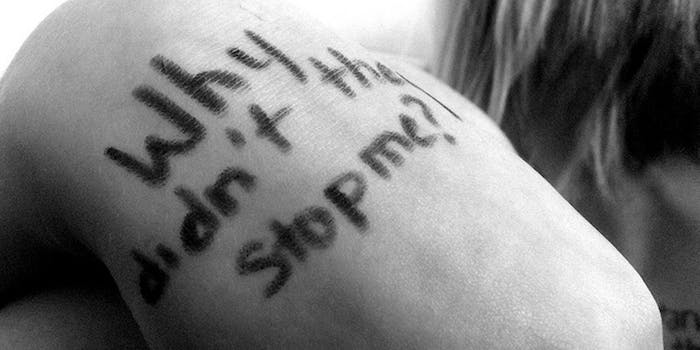 The site, built on freedom of expression, is considering a prohibition on posts that glorify anorexia, suicide, and other self-injuring behaviors.

After Tumblr made the news for so-called “thinspiration” blogs, which glorify anorexia, the blogging service has decided to take a stance against self-harm with a proposed update to its content policy.

Though Tumblr has long been an open platform where community members are free to discuss pretty much anything on their minds, the site’s staff admits Tumblr “sometimes gets used for things that are just wrong.”

On this short list of Tumblr’s exceptions to freedom of speech, the promotion of self-harm has been added to spam and identity theft.

Tumblr wrote on its staff blog:

“Our Content Policy has not, until now, prohibited blogs that actively promote self-harm. These typically take the form of blogs that glorify or promote anorexia, bulimia, and other eating disorders; self-mutilation; or suicide. These are messages and points of view that we strongly oppose, and don’t want to be hosting.”

A couple of weeks ago, the Huffington Post exposed “thinspiration” or “thinspo” blogs, kicking off a recent debate. But this seems to be an issue that both Tumblr users and the company have been wrestling with for some time. Some suggested explicitly prohibiting such content. Others proposed adding advisory messages that direct readers of such posts to organizations such as the National Eating Disorders Association.

“Active Promotion of Self-Harm. Don’t post content that actively promotes or glorifies self-injury or self-harm. This includes content that urges or encourages readers to cut or mutilate themselves; embrace anorexia, bulimia, or other eating disorders; or commit suicide rather than, e.g., seek counseling or treatment for depression or other disorders. Online dialogue about these acts and conditions is incredibly important; this prohibition is intended to reach only those blogs that cross the line into active promotion or glorification. For example, joking that you need to starve yourself after Thanksgiving or that you wanted to kill yourself after a humiliating date is fine, but recommending techniques for self-starvation or self-mutilation is not.”

Any blogs that are affected by this proposed move will have a grace period to change or download any content related to this issue.

Tumblr also plans to display public-service announcements when users search for tags that are typically associated with blogs promoting self-harm. This means that whenever a community member searches for tags such as “anorexia,” “anorexic,” “bulimia,” “bulimic,” “thinspiration,” “thinspo,” “proana,” “purge,” or “purging,” relevant messages will be displayed.

Here’s an example of a message which might be shown:

“Eating disorders can cause serious health problems, and at their most severe can even be life-threatening. Please contact the [resource organization] at [helpline number] or [website].”

Tumblr’s mission against self-harm has already attracted a great deal of discussion, with many community members supporting the move.

“This is why Tumblr is so awesome,” wrote Hailey. “Things like that really don’t need to be on the Internet, it just doesn’t help those who are already struggling. Tumblr should be a place with good and positive posts; not negative and suicidal posts.”

“I personally promote this,” commented Krystle. “Blogs that encourage people to self-harm are disgusting by nature. I can understand wanting to help people, or show them they are not alone, but proana, promia, and pro-cutting blogs need to be removed.”

“Both of these ideas are great,” said a community member on the blog Sleeping Between Pages, referring to the content policy and the PSA proposal.

The Tumblr community isn’t the only blogging outlet to debate this issue. Last year, users of Google’s Blogger sought to petition the service to clearly label self-harm blogs.

If you have any comments or suggestions on the proposed policy changes, Tumblr is looking to hear from you by email or on Tumblr.