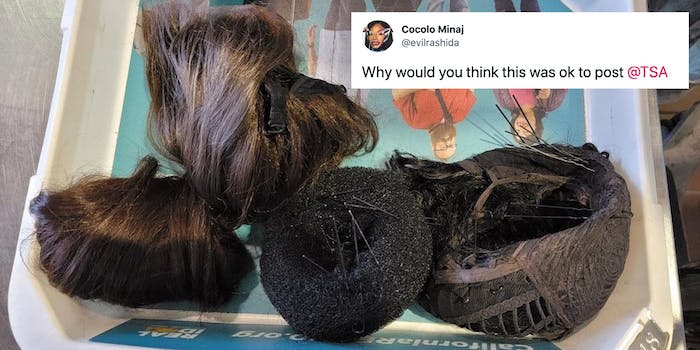 ‘This is sanctioned humiliation’: TSA under fire for Instagram post about taking wigs out of bags, using AAVE in caption

The agency issued an apology to its Instagram Story.

An Instagram post from the Transportation Security Administration (TSA) has folks on the internet outraged, as the post uses AAVE and seems to target Black travelers.

The Instagram post showed a picture of several wigs in a bin, waiting to be run through security. The caption claimed that TSA officers may sometimes ask passengers to undergo “additional screening,” which may include removing wigs from luggage so they can be checked separately.

“This could be to resolve an alarm or as part of other security measures,” the caption stated. But the caption also included AAVE terms such as “no tea, no shade” and “shante.”

AAVE stands for African American Vernacular English. Non-Black people are discouraged from using AAVE terms—like “shante” and “no tea, no shade”—because it is appropriative.

As it’s unclear whether the employee running TSA’s Instagram account is Black or not, the vocabulary choices were met with varied but generally negative reactions. Regardless of who runs the account, several people pointed out that corporate or brand accounts shouldn’t ever use vernacular that isn’t natural to or consistent with their content or brand.

Twitter user @mooshwa_v2 said they’ve noticed brands only use AAVE when addressing Black topics and no other times.

“This really how a lot of white ppl act when they talk to black ppl tho, they really ‘put it on’ if that makes sense. Every demographic they tried to relate to with this caption is feeling uncomfortable and/or offended lol,” Twitter user @ShufflesWorthh tweeted.

Twitter user @Loquacious_Pint accused the TSA of lying and called them out for “constantly” saying how thorough TSA security systems and machines are.

“But they conveniently can’t handle a few ounces of fabric and hair? This is sanctioned humiliation,” she said.

Another Twitter user, who says they used to be a screener, said the TSA knows “good and damn well” that wigs don’t look like a threat, implying that the situation was completely unnecessary.

Folks on Instagram found the situation humorous, and several claimed that the post’s language and tone alluded to RuPaul’s Drag Race, hence the hashtag #RuPaulDragRace.

That appears to be the entire case, as Bob the Drag Queen, RuPaul’s Drag Race season eight winner, seemed to indicate on her Twitter.

“Yall TSA man has removed my wig from the bag and it running it through the scanner by itself,” Bob tweeted.

“Not y’all posting this after Bob the Drag Queen said their wig was being put through security on its own,” one fan commented on the Instagram post.

One user loved it so much they said, “Whoever runs this account deserves a raise!”

People on Twitter had the exact opposite opinion, saying whoever wrote the post and whoever approved it should be fired.

When reached for comment, R. Carter Langston, TSA media relations manager, told the Daily Dot in a statement, “The post was in reference to the winner of season 8 of RuPaul’s Drag Race and the catchphrase used when a contestant wins.”

On Instagram, the TSA posted an apology on their story, saying, “We apologize for the insensitivity of this post. Our goal is to provide interesting content that helps clarify our checkpoint procedures, but this one missed the mark. We will continue to work to engage and inform the traveling public going forward.”