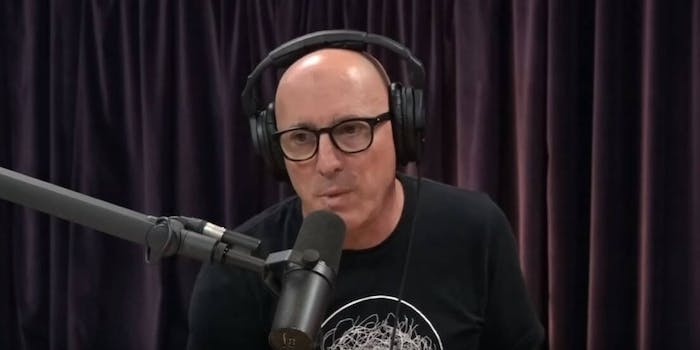 Maynard James Keenan gets it.

Taylor Swift fans might not know who Tool is, but Tool’s lead singer knows all about Swift—and apparently about geek culture memes. And Maynard James Keenan didn’t mind poking fun at her after the prog-metal behemoth knocked Swift off the top of the charts with the band’s first album in 13 years.

With Tool’s Fear Inoculum taking over the No. 1 spot on the Billboard album charts, pushing out Taylor Swift’s latest release Lover, Keenan tweeted out an image of himself Photoshopped as Thanos, snapping his fingers and sending Swift into oblivion.

As Billboard noted Sunday, Tool sold 270,000 units of Fear Inoculum in the week after its release, becoming the most successful rock album in the past year. For Swift, a week after selling 867,000 units for Lover, she fell to 178,000 while going up against Tool.

Swift fans have dreaded this moment. Last week, when it became clear that Keenan’s band would overtake Swift on the charts, they attacked, commenting on the length of Tool’s songs and, for some reason, making fun of the fact it had been more than a decade since Tool released new music.

“Who the fuck is TOOL? and can they move their fat ass like genuienly [sic] no idea who that is am i the only one??????” one Twitter user wrote. Another Swift stan account wrote, “Apparently they were really big in the ’90s.”

Dads all around the world when they realize Tool is about to overtake Taylor Swift for that number 1 spot pic.twitter.com/XlRYmaqE4E

This isn’t the first time Keenan has taken on a giant pop star. In July, after it was revealed that Justin Bieber was a big Tool fan, Keenan tweeted a curt “#bummer” to show his apparent displeasure. In a recent interview, though, Keenan said, “When I make a statement like ‘#bummer,’ it has nothing to do with him. It has to do with I know that the ocean of shit that’s going to follow because he couldn’t just be a quiet Tool fan, he had to say it out loud, and now I know the flood’s coming from the people that don’t get it, and the people that think they do, and they’re going to argue with each other. And it’s going to be stupid. And it doesn’t matter. And this poor kid’s caught right in the crosshairs, as he was, as he is.”

So, apparently it has more to do with fan bases feuding with each other (in that case, Tool’s fanatics vs. Bieber’s) than with Bieber liking the 10,000 Days album. While that exchange had a hint of nastiness, that doesn’t appear to be the case with Tool vs. Swift (at least from the artists’ perspective).

And at least one wholesome media moment has emerged from Tool vs. Swift. There’s a fantastic Swift/Tool mashup out there that is effective (and I know this from personal experience) in bringing together a 9-year-old Swift fan and their metal-loving dad and making them rock out in the kitchen together as dinner cooks on the stove.