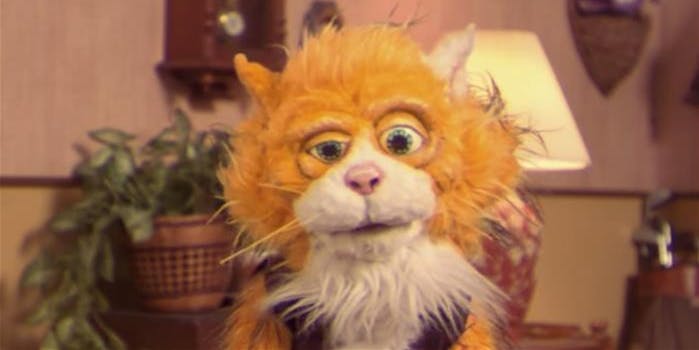 Why the Internet can’t stop overanalyzing ‘Too Many Cooks’

Too Many Cooks doesn't have a problem, but the Internet does.

You’ve seen Too Many Cooks by now, right? In certain corners of the Internet, it’s probably the only thing you’ve been seeing over the past few days.

In a nutshell: Williams Street, the production company behind much of Cartoon Network’s [adult swim] programming, released a bizarre 11-minute short by Casper Kelly (of the programming block’s Squidbillies and other shows) that starts as a parody of the admittedly ridiculous opening credit sequences of ‘80s and ‘90s American sitcoms. Then, it takes a darker turn, spurred on by a machete-wielding serial killer who keeps popping up in everybody else’s title sequences.

If you ever watched a sitcom, you know what Too Many Cooks is lampooning: the half-turns to face the camera by each character, the simple situations meant to illustrate who that character will be on every episode, the precocious baby and/or puppet sidekicks. Too Many Cooks has numerous cute babies, as well as Smarf, who’s both a mangy puppet and possibly a cyborg assassin from the future. But that’s neither here nor there.

Too Many Cooks is right in line with the short-form absurdism that’s come to characterize [adult swim] over the years, and yet it’s taking off in a way few of their shows or shorts have. Part of it is the completely viral nature of the phenomenon; the network ran the bit repeatedly in the late hours of the evening, during blocks normally scheduled for infomercial programming, and once it hit Reddit, the Internet came to know it en masse shortly thereafter. Presently it’s the sort of watercooler item that most marketers with an understanding of viral videos lust after. Even CNN is buzzing about the “sinister parody video” that everybody’s forcing their friends to watch repeatedly.

But, as is the cast with most weird things on the Internet, from meme to video to the endless iterations of Nicolas Cage’s face appearing on things,  it’s not enough for the online world to offer up a pop cultural item that people can laugh at, appreciate, and look back upon when they remember it years down the line. Too Many Cooks, perhaps because of its standing as an absurdist trifle, has reignited a much larger debate about Web culture, the one about how everything gets a thinkpiece sooner or later and nothing can ever simply be.

The tightrope walker Phillippe Petit once said, when asked why he traversed the Twin Towers, that “there is no why.” And with Too Many Cooks, it seems as though audiences are demanding a “why,” even though Kelly himself said in a Reddit AMA that “I think it was a shower idea, just simply the idea of a show sitcom open that doesn’t stop. It made me laugh. But I didn’t think it could work for 11 minutes so I didn’t do anything with it.”

And yet, the dissection has begun. Vox offered a detailed profile on what Too Many Cooks is, what it’s parodying, why it might be funny to some and unfunny to others, and what it all means. The New Yorker offered brief, bitter thoughts on how [adult swim] bits like this one tie into a perversion of idyllic capitalist pop culture. And because the inevitable endgame of any and all Internet discourse is the snake eating its own tail, Deadspin offered a rebuke to the whole enterprise, talking about the Internet’s “problem problem” in relation to the entire conversation surrounding Too Many Cooks.

In the Deadspin piece, replying to a Twitter overanalysis of the sketch/short film/whatever this thing actually is, Drew Magary hyperbolically notes, “I have to think that Slate is angry they didn’t get to this take first, because it’s important that we take every single last disposable piece of pop culture and f***ing break down the 58 layers of subtext behind it to show why America ought to have a problem with Smarf.” Magary’s thoughts are brief, but the point is clear: Everything is problematic in modern culture, everything is overanalyzed, and nothing can simply be as it is.

The point to take away isn’t so much Magary’s heated thoughts on the culture of “problem” thinkpieces, per se—the discussion of whether we’re too critical as a society of offensive material is really more appropriate for a book-length treatise than a short essay. Magary’s salient point, though, is that rarely can a bit of absurdism go viral without people trying to find meaning.

In the film Birdman, currently in theaters, there’s a card that sits on Michael Keaton’s dressing room mirror, prominently displayed, one that comes to mind when considering the debate around Too Many Cooks: “A thing is a thing, not what is said of that thing.” While that’s perhaps a bit of a logical copout, inasmuch as it implies that dialogues about anything have little effect on how it’s ultimately perceived (more a romantic notion of art than a realistic one), it’s still a resonant idea. What exactly distinguishes the absurd from the purposefully absurd from the meritless nonsense? Since the answer is usually “perspective,” it’s not as easily solvable a riddle as we may think.

The trend of hyper-analysis isn’t inherently a bad thing; this is not the point of this piece, even if it may or may not have been the point of Deadspin’s. (We haven’t spoken with Magary, so we can only speculate on tone.) Because of the Internet, the ability to carefully dissect things like Too Many Cooks is no longer a concept reserved for young academics with overly keen eyes. Knowledge has become broader, and people are far more capable of articulating concepts that used to be privileged knowledge and are now widespread discursive canon. In principle, this is a fantastic thing. Access never hurt anybody in and of itself.

But what thinkpiece culture has added to the mix is the idea that because we are now able to analyze things in this way, we must analyze it this way and, more importantly, we must analyze anything and everything in this way. It’s led to the widespread revocation of the idea that sometimes the cigar is just a cigar, that the thing can just exist without being defined by what is said of it. As a culture we’ve been handed the raw, crude materials of textual analysis, without the framework or the necessary discussions of when to say when.

This isn’t to say that we should stop being critical—far from it. But if the natural reaction to a late-night sketch at four in the morning is to wonder if it’s actually about shifting family values in the post-9/11 landscape, perhaps it’s time to consider whether a thing is, in fact, just a thing, not what we say of it.

Photo via Too Many Cooks/YouTube