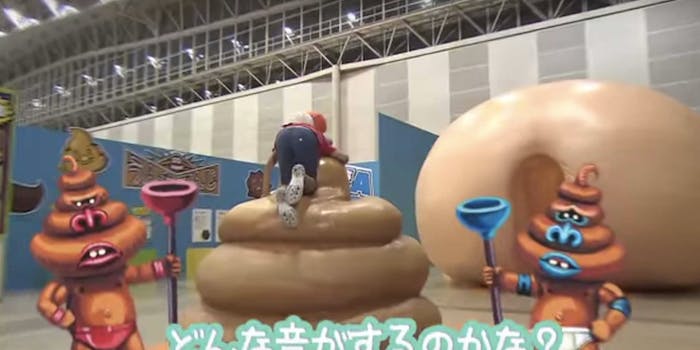 Japan is educating children with a giant inflatable butt

Enter through the anus.

As a small child obsessed with toilet humor, I’d always dreamed that I’d grow up retaining that crude sensibility and one day write about such things for money.

Now that I’m an adult human—still on the small side—and traveling the world in order to take pictures of hilariously labeled condoms, it’s safe to say I’ve definitely held fast to my immature ways. Oh, and now I write about bizarre booty-related shit like my wellbeing depends on it. So there is nothing that makes me feel more like I’m living the dream than the pillowy inflatable ass featured at a Japanese children’s display about the body.

Karada no Fushigi Daibouken is an event put on by TV Tokyo to educate youngsters about where shit is made and other amazing bodily functions. The monthlong exhibit, which lasts from July 27 to August 22 at the Saitama Super Arena, is basically the amusement park I’ve been mentally building since I was old enough to pick my nose and horrify my parents with my boogers.

Enter through the giant, inflatable, gaping anus and explore excrement in surprisingly SFW ways: by climbing on swirls of shit, sitting on display toilets with strange graphics that probably just alert security whenever someone “accidentally” takes a dump on the LED screens in their bowls, and sliding through a colon faster than the aftermath of an unlimited mozzarella sticks night at TGI Friday’s.

There’s a lot on display that actually doesn’t make a whole lot of sense in terms of health education, but then again, kids don’t mind logical fallacies if they mean you can shoot “booger” balls into a giant nose with a neon green airsoft gun. The burps and belches section, where children try to force enough soda down the throat and into the translucent stomach of a plastic cartoon character of man in order to make him burp, poses a lot of ethical dilemmas. It also makes me want a see-through stomach, because that would be metal as fuck.

RocketNews24 says this smorgasbord of nastiness is deliberately disgusting and also weirdly affordable—for less than the equivalent of $13, you can spend an entire 10am-to-5pm day trying to get to poop and that booty. Kids’ tickets are just over $7.

Would it look weird if you and your friends went into Karada no Fushigi Daibouken sans kids? Absolutely. Does it already look weird that a 36,500-person capacity venue has been overtaken by cartoonish toilet humor? Ya damn right. So go forth and enjoy all that the body has to offer—shit, farts, snot, and all.