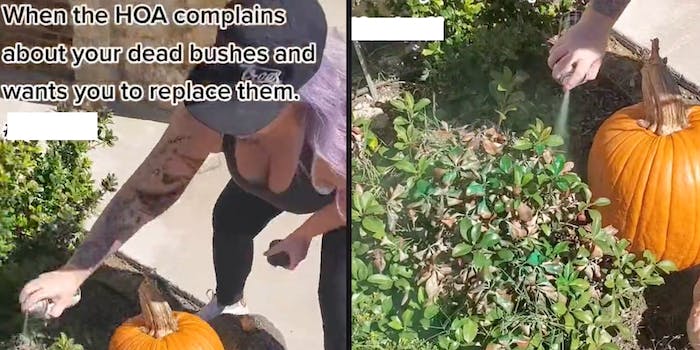 ‘THEY can control what YOU own’: TikToker spray paints dead bushes green to comply with HOA, sparking debate

People were divided over the role of HOAs.

“That’s a nope!” she wrote in the caption.

The TikToker’s viral video shows her spray painting her half-dead bushes to be a more vibrant shade of green. The video has gained over 3.9 million views and 166,500 likes since posting Oct. 16.

A text overlay reads, “When the HOA complains about your dead bushes and wants you to replace them.”

An HOA creates and enforces rules for a community’s properties and residents. Homes within an HOA’s jurisdiction automatically become members and owners are required to pay dues.

The TikTok sparked a debate in the comment section over the role of HOAs. Many commenters sympathized with the TikToker and complained about HOAs.

“HOAs should be illegal. You pay them money so THEY can control what YOU own. I will never understand,” says @lisamari_781.

“HOAs can go overboard sometimes but they mostly help keep the community looking nice. I wouldn’t want to live next to an unkempt property,” says @melanin579.

“The whole point of moving into an HOA is maintaining the aesthetic of the neighborhood. If you can’t, leave,” says @lb75328.

The Daily Dot reached out to @brandylong490 for comment.