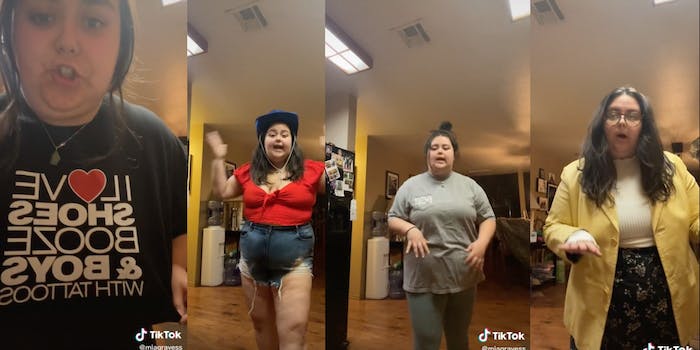 ‘If you saw this, you would not let my a** into a courtroom.'

Jury duty is a time-honored American civil tradition that some people just love to hate. Getting out of it has been a popular storyline for television and film, and now it’s gained a TikToker 3 million views on a video about how she did it.

TikTok user @miagravess shared multiple outfit options she said were designed to get her sent home from jury duty.

“Hey besties, I have jury duty in the morning, just found out I literally have to show up,” she says in the clip. “I’ve pushed it off like twice and I do not want to go. So I’m gonna try to put together an outfit that just screams, ‘Send that bitch home.'”

The first outfit, that she describes as looking like a “menace to society,” includes pink Crocs, Lululemon shorts, and and oversized T-shirt that reads, “I love shoes, booze and boys with tattoos.” The second option, which she dubs “walking distraction,” is a low cut red blouse, very distressed denim shorts, and cowboy boots. The third is an Elle Woods-inspired look, which she calls her “overqualified” outfit designed to intimidate people—a yellow blazer, black pants, and a white blouse. Her last option, “I just woke up like this/I’m unwell,” features a fraternity T-shirt, Lululemon leggings, and slippers.

This strategy apparently worked. A followup video that went just as viral as the first shows that she was let out of jury duty by the judge. The first outfit, she notes, did the trick.

@miagravess wrote in the comments section of her video that some suggested other means of getting out of jury duty, such as pretending she had COVID or that she was racist—something she said she would never do.

“Stay educated and get vaccinated,” she wrote.

Others threw in tips to make some of her outfits even more outrageous, like substituting the pink claw clip from her first outfit with a literal chip bag clip.

When another user commented that they actually wished more young people who believe in restorative justice would serve on a jury, @miagravess said she completely agreed and that she wanted to get out of jury duty because she was moving and it was her last week at work.

Others shared their own tricks to getting out of jury duty, ranging from expressing a lack of faith in the judicial system to straight up crying.

Update 2:13pm CT Sept. 2: When reached for comment, @miagravess told the Daily Dot that she and her friends always joke about how she gets “really stressed out about outfits before events.”

“So, I will typically FaceTime them like the night before when I like pick out what I’m going to wear, but like now that we’re older and like have jobs, it’s not as easy to kind of like pick up the phone. So I was like you know what, like I’ll film it,” she said of how her TikTok came to be.

The 20-year-old Oregon State student added that her goal was how to dress up “as a red flag in the eyes of someone who wants you to make a decision.”