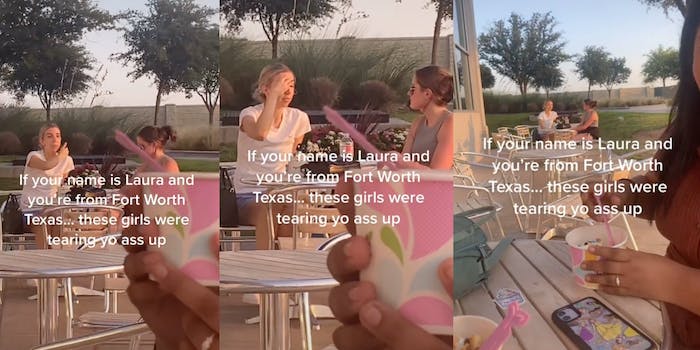 ‘If your name is Laura … these girls were tearing your a** up’: TikToker films girls talking smack about possible manager, dividing viewers

A TikToker is exposing two young women from Fort Worth, Texas, for talking behind the back of another woman named Laura, who may or may not be their manager.

“If your name is Laura and you’re from Fort Worth, Texas… These girls were tearing your ass up,” text overlay on the video reads. It appears the TikToker and the two girls are sitting outside of a frozen yogurt shop.

The video shared by @stephanie.onassis has garnered over 884,000 views on the platform, increasing the likelihood that the girls will be recognized— similar to another viral TikTok video from earlier in 2021, wherein another group of friends was exposed for talking behind their friend’s back.

“Someone tag me when Laura sees this lol watch these be Laura’s ‘friends,'” one commenter wrote.

While the TikToker captioned the video, “I’m on Laura’s side,” many viewers deflected. “LMAO they are my coworkers… laura is the manager,” the top comment on the video reads, to which the poster of the video replied: “this is not true, Laura is their friend.”

Another top comment notes that “if Laura is the manager,” they are on the girls’ side.

Other commenters are criticizing the TikToker for violating the privacy of the two girls, regardless of whether Laura is their boss or not. “What ever happened to minding your own business?” one commenter wrote.

Another commenter questioned what seems like a new norm: filming people without consent who aren’t talking to you, and putting them on blast. “Wait this is considered OK now?” they wrote. “I agree filming someone when they are arguing/fighting with u or a group but not this right?”

However, in the spirit of a joke, anyone named Laura has found a moment that’s all theirs.

“Omg thank you now I know who my real friends are,” reads a comment from an account that appears to have been created just for this video, given that it has no followers, follows no one, and is called “Laura from Fort Worth.”

The Daily Dot has reached out to the video’s poster, @stephanie.onassis.