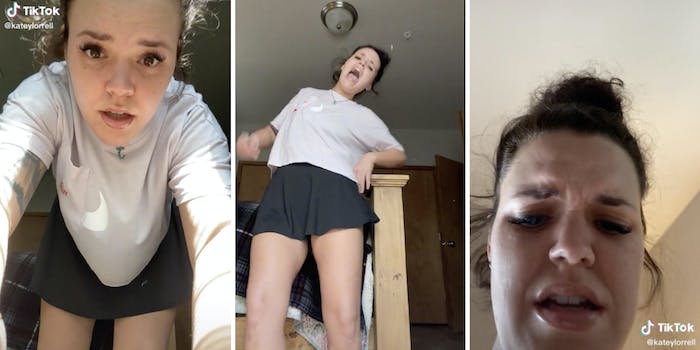 ‘Just trying to show my fit off but the good lord had other plans’: Woman bumps into bed frame and creates viral TikTok sensation

‘Not me watching this 50 times gasping for air.’

This week, a TikToker created a viral sound after hitting her bed and making a high-pitched “ah” sound. Thousands of people have duetted her video, some going viral and getting millions of views for using the sound in funny ways.

The original video, which has over 9.3 million views and was posted three days ago by Katey Bridges (@kateylorrell), shows the TikToker setting up a camera to film herself. As she moves backward to get into the camera’s frame, she bumps her hip on the corner of her bed and makes a high-pitched “ah” sound as she falls over.

“Just trying to show my fit off but the good lord had other plans,” the TikToker captioned the video.

Many users in the comments section of the video said the “ah” sound the TikToker made was hilarious.

“Not me watching this 50 times gasping for air,” one viewer commented.

“Quick someone remix the ‘ah’ into stayin alive,” another responded.

“Bro that AH was so CRISP. It needs to be made into a sound,” a third replied.

The TikToker did make the infamous “ah” audio into a sound. Over the past few days, more than 9,000 TikToks have been made under the sound and multiple people have gone viral for using it in clever ways.

“It’s been absolutely insane! I had no idea that me hurting myself would go viral. I absolutely love all of the duets and comments. People are so creative and funny. Just a simple outfit of the day video, gone wrong,” the creator, Katey Bridges, told the Daily Dot.

One video, which has over 9.8 million views, features a TikTok user (@penintonn) singing “No Matter What I Do” by Nelly over the audio, letting the “ah” sound replace one of the lyrics.

“Alright we can do this. Ready?,” the creator says in the video. “No matter what I do…”

“All I think about is you,” the creator sings.

Another video, which has over 7.5 million views, features a different creator singing “Stayin’ Alive” by the Bee Gees over the audio. Other videos with millions of views have used the “ah” sound to cover “When I Was Your Man” by Bruno Mars, “Fergalicious” by Fergie, “More Than a Woman” by the Bee Gees, and more.

The TikTok audio has even been used by actor Stephen Amell from the television series Arrow, who quoted a line from the series and pretended to shoot the TikToker with an arrow—leading to the “ah” sound.

“Y’all, these duets and stitches got me HOLLERING,” the TikToker replied in the comments section of her original video.

The duets using the audio have even caught attention on Twitter, where someone has compiled a thread of their favorite takes on the viral sound.

“This person on tiktok bumped into the corner of their bed frame and made a really funny noise that has become a trend on the app, and i’m gonna start a thread of some of the ones that have had me weak af,” the Twitter user said.

Since the TikToker’s sound went viral, she now has over 14,700 followers. She hasn’t posted any follow-up videos since her last video blew up.

Editor’s note: This story has been updated with a comment from the TikTok sound’s original creator.