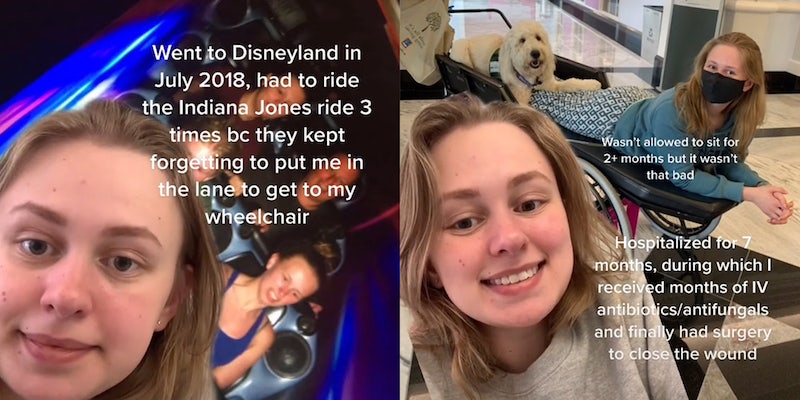 The park gave her a FastPass for the inconvenience.

A TikToker went viral for claiming Disneyland is responsible for her chronic bone infection.

The TikToker, known as hotwheels or @gamma.aminobutyric.acid, says she went to Disneyland in 2018 and had to ride the Indiana Jones Adventure ride three times because the ride operator kept forgetting to put her in the lane to get her wheelchair. Her video allegation has received over 1.3 million views.

Riding the attraction so many times caused a scrape on her bottom that devolved into a stage four wound, she said.

In 2019, she was hospitalized for six months for osteomyelitis and malnutrition. Osteomyelitis is an inflammation or swelling that occurs in the bone that can result from an infection somewhere else in the body that has spread to the bone, or it can start in the bone, often as a result of an injury, according to Hopkins Medicine.

Between 2019 and 2021, the TikToker was in and out of the hospital for chronic osteomyelitis from her prolonged wound. She says she wasn’t allowed to sit for more than two months, “but it wasn’t that bad.”

The TikToker claims she was hospitalized for seven months, during which she received months of IV antibiotics and antifungals before finally having surgery to close the wound.

Several viewers were outraged on the TikToker’s behalf, asking if she sued Disney over the incident.

“Did you uh… sue Disney cause.. like… I smell a lawsuit,” one commenter wrote.

She says she didn’t think she had enough evidence for a lawsuit, though.

In a follow up TikTok, she explained that she never pursued any legal action and believes the time has passed to do so. Thinking back, she vaguely remembers signing something after the ride because the operator got a supervisor to talk to her. She said what she probably signed was an agreement to not sue Disney for what happened, which sounds likely.

“Of course I signed it because I didn’t think it was a big deal, I thought it was funny as shit that I got stuck on a ride,” the TikToker said.

But based off everyone’s comments on her TikTok, she said she’d do some research, presumably to see if there’s anything she can do now. Her “compensation” for the incident was a FastPass that the park gave her that day.