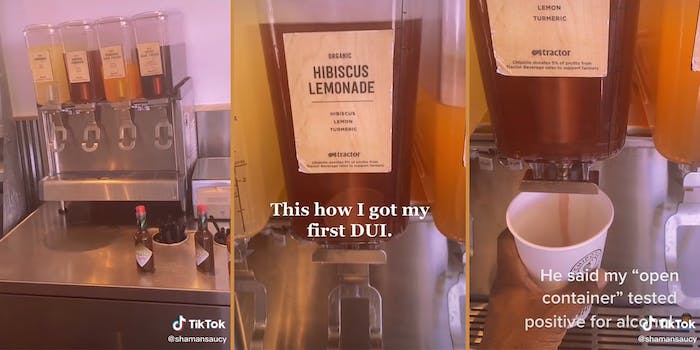 TikToker says hibiscus lemonade at Chipotle got them a DUI

'He said my 'open container' tested positive for alcohol.'

A TikToker claims that an innocent lemonade ordered at a Chipotle in Las Vegas led to that TikToker’s “first DUI.”

The TikToker, who posted the video to the @shamansaucy account, claims that a Hibiscus Lemonade drink ordered at a Chipotle in Las Vegas—where the TikToker appears to live, judging from the account bio—led to them getting accused by the Las Vegas police of driving under the influence.

While the TikToker promises a video later to explain what happened, this short video sketching out the basics—starting with a view of the Hibiscus Lemonade dispenser where the saga allegedly began—has garnered more than 1.2 million views since the video went up on the platform on Monday.

Soundtracked to a section of The Weeknd’s “Heartless,” the video declares via caption, “This how I got my first DUI.”

The video goes on to claim via on-screen caption, referring to the officer who accused them of driving under the influence, “He said my ‘open container’ tested positive for alcohol.”

It goes on to assert, via the caption submitted with the TikTok, that it was the TikToker’s “first DWB DUI in Las Vegas.” The TikToker also used the hashtags #crookedcops and #racialprofile in the caption.

According to Nolo’s resource page on open container laws in Nevada, the threshold for what constitutes an alcoholic drink in the mixed-messages state is actually very low.

An “alcoholic beverage,” per state law, is defined as:

The open container component of the law refers to “a container that has been opened or has a broken seal,” and the misdemeanor carries a maximum penalties are “six months in a county jail and/or a maximum $1,000 fine.”

On the comments section of the video, a former Chipotle employee asserted that the lemonade mix in question is just concentrate and water, but the TikToker asked, “Some people saying the concentrate could ferment and test positive?”

Another respondent came back with, “Y’all realize alcohol is literally rotten fruit? You can make it with grape juice and yeast. It was probably bad and fermentation happens.”

The TikToker pondered that and said, “I need to do a test in court lol.”

The Daily Dot has reached out to the TikToker and to Chipotle for comment.