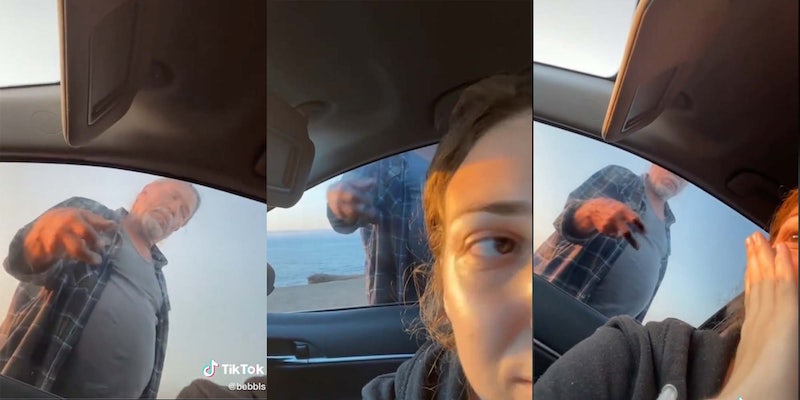 ‘You’re gassing everybody out’: TikToker films man demanding her to turn off her car at beach parking lot, dividing viewers

In a TikTok posted on August 10, a man is seen repeatedly knocking on TikTok user @bebbls’s car window. He tells her to turn her car off because she’s “gassing everybody” out on the beach, and she refuses.

“Everybody else just staring as I’m being harassed nobody steps in,” @bebbls wrote in the overlay text of the video. The man calls her a “selfish little wench.”

@bebbls tells him that her child is in the car with her, so she can’t turn off the car because her air conditioning will turn off as well. She later shows the sweat on her baby’s head, indicating that she needed the air conditioner to cool the child down.

@bebbls filmed another TikTok showing people sitting in their running cars at the beach, seemingly to demonstrate that it is not uncommon for beachgoers sitting in their cars to leave their vehicles on.

Some commenters shared @bebbls’s surprise that none of the bystanders shown in the video stepped in and agreed that it was normal to leave the car running when staying inside of it.

“Lmao I go to the beach to sit in my car, @newmomhacks said. “I just like the views not the sand. I stand with you mama!!!”

“People don’t realize this is EXTREMELY NORMAL in CA to sit in their car at the beach and watch the sunset…” @erinnpeace wrote. “Let the girl enjoy the sunset in peace.”

Other commenters weren’t on @bebbls’s side. She captioned the video with #Karen hashtags, but @lalalikhadi commented, “You’re the karen here.”

“I mean u are in the wrong like roll ur windows down or get out no need to sit with it on,” @leif.burns wrote.

“I think it’s because you’re so close to other people,” @lagigi67 said. “Maybe park a little further out.”

The Daily Dot has reached out to @bebbls.